This is not a fire drill.

In actuality, it’s far more real, more natural and organic. Like a swarm of bees hovering around their hive. 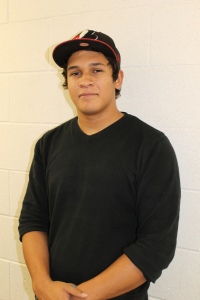 Freshman biology major Christian Rodriguez thinks the front of Lombard Hall is a “great place to meet up.” // PHOTO BY KELSEY MARCHETTI

Walk past Lombard Hall, one of Curry’s freshmen residence halls, on most any Friday at around 11 p.m. and you’re bound to see countless students milling about doing absolutely nothing in particular. On a good night, there are close to 75 kids aimlessly wandering. Some are all dressed up with no place to go. Others are downright grubby in sweats and baseball caps. For as far as the eye can see, students are sitting and standing, talking and flirting, arguing and laughing.

The thing is, it’s not entirely clear why they’re doing these things there.

“It’s a great place to meet up,” said freshman Christian Rodriguez, a biology major. “It’s right in the middle of State [House] and NCRH. It’s the halfway point between the dorms, so it’s a good place to meet new people or old friends. Obviously, some do a little drinking or grab a quick cigarette. I think it’s a good way to see what other people are up to.”

“When I toured the school, I was told a lot of people stay on weekends. Now I realize that the school is more of a suitcase school,” said freshman Katie LeBlond, a nursing major.

Curry’s Student Activities office is working to produce more weekend events, as is the student-led social activities club SEE. But without fraternities and sororities at Curry, or off-campus housing that’s within walking distance, there simply are a lack of parties that students crave.

So, first-year students have made their own little party—outside Lombard.

“Students meet up with friends there because it’s a common hanging spot for freshmen,” said LeBlond. “They go to socialize with their friends because there are benches and fences they can sit on.”

Added freshman Jamie Cassagrande, a communication major: “There are typically a lot of people there at night when there are no scheduled activities, but it would be unreasonable for Curry to schedule activities all hours of the night.”

By around 2 a.m., students tend to buzz off to their own designated areas, whether it’s a friend’s dorm to hang out or their own dorm room to get some sleep. Sooner or later, though, they will again gather outside Lombard during another evening of boredom, a swarm of students simply looking for a good time.