Wide receiver Rob Bambini made his senior season a memorable one.

In his final year of football at Curry, the Westwood, Mass., native broke three all-time records. Bambini now owns the records for the most receptions (210), most receiving yards (2,922) and most touchdown receptions (38). 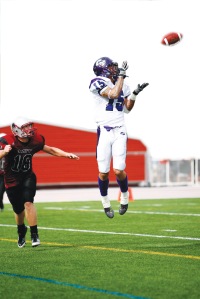 “I had to catch a lot of passes, work hard on and off the field,” said Bambini, a criminal justice major. “There’s a lot of things people don’t see until game day, when you get to showcase all of your hard work. It just takes a lot of hard work and determination.”

On Oct. 8, Bambini’s last-gasp heroics led Curry to victory over Western New England, 35-32. He had two 39-yard touchdown receptions in the final 15 minutes of the game, including one with exactly one second left in regulation. That game stood out as Bambini’s best performance of the season, as he totaled 14 receptions and 177 receiving yards. He also had two first-half touchdown receptions to add to his tally, making it a four-touchdown game.

“I love the game of football,” explains Bambini, who, amazingly, played only one season of high school football. “It teaches you a lot of life lessons, responsibility and friendship. I don’t think any other sport except for football can give you that.”

In a Sept. 21 game against M.I.T., Bambini caught the game-winning touchdown pass and marshaled a Curry comeback win, 31-28. Bambini thrived against the M.I.T. defense, amassing 13 catches for 221 yards and one touchdown.

Despite playing in only eight of the 10 games this season due to injury, Bambini recorded a whopping 74 receptions, totaling 908 receiving yards and 14 touchdowns.