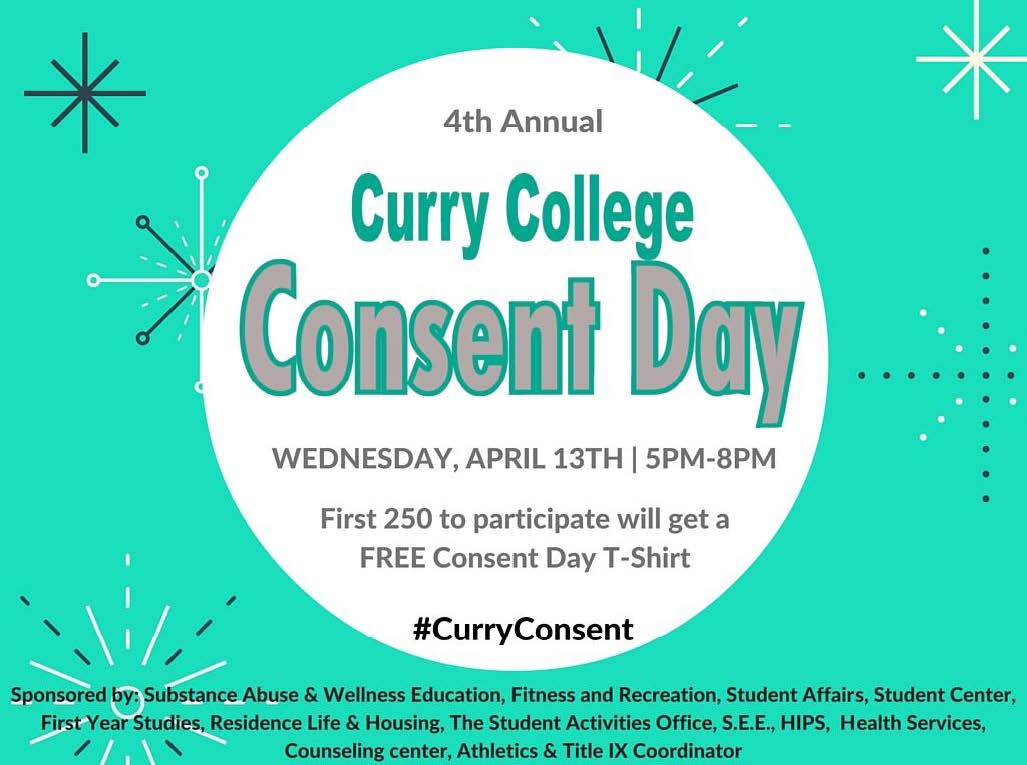 Curry College’s fourth annual Consent Day is coming up. On Wednesday, April 13 in the Student Center from 5-8 p.m., students will be given the opportunity to participate in events and discussions revolving around what sexual consent actually is.

Consent Day offers sexual education in the college setting. According to co-chair of the Consent Day committee, junior Health and Wellness major Kayla Keany, Consent Day is meant to empower students to overcome fear and to learn how to say no when feeling uncomfortable in sexual predicaments. Consent Day also offers information about safe and consensual sex.

Curry holds an annual Consent Day in an effort to increase awareness about healthy sexuality, sexual assaults and how students can play a role in preventing sexual assaults on campus.

“It is the only event of its kind on our campus that both raises awareness and provides education,” says Keany.

Preparations for Consent Day start months in advance with the formation of the Planning Committee, which involves inviting numerous groups and departments from all over the college — Athletics, FYS, Student Affairs and Student Activities — to help fund, plan and volunteer at the event. This year’s committee is co-chaired by Keany, junior Communication major Caroline Finamore, Fitness Center Director Sarah Simunovich and Counselor Idonia Gaede.

Preparation also includes deciding on a theme, T-shirts logos and which events will be held. The first 250 students to attend this year’s event will be given a free Consent Day T-shirt.

The event is sponsored by student-run clubs such as Student Events and Entertainment (S.E.E.) and Health Image Power Success (HIPS). Some favorite events from past years, like the Blurry Vision and Consent Relay Race, will be back, as well as new features including a photo booth sponsored by S.E.E.

Consent Day is a campus-wide event that everyone in the community is invited to participate in. Discussions will be held on the importance of sexual consent, and the consequences of sexual misconduct. 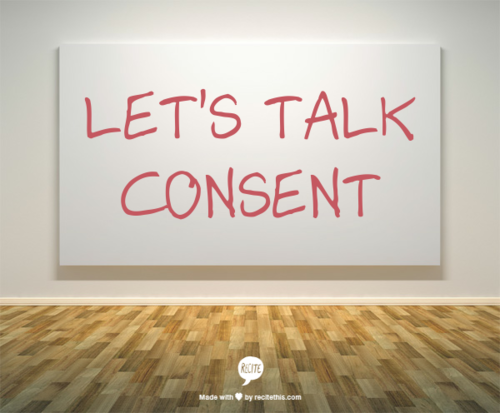 Sexual assaults are a big problem on many college campuses. It is estimated that one in five women have been sexually assaulted during their college years. There were at least three reports of sexual assaults on campus at Curry College in 2013 alone.

There were multiple interactive activities for students to take part in during the Feb. 26. event. All were geared toward educating students about what “consent” is, the roles alcohol and other drugs play when it comes to consent, and also the resources available for victims of sexual assault.

As a way to draw students to the event, held in the Student Center, R.A.G.E. offered a free T-shirt to the first 300 students that completed all of the activities and turned in their stamped activity card. R.A.G.E., which stands for Raising Awareness Through Group Education, is a student-led, peer-education club.

Kerry Antunes, interim staff adviser to R.A.G.E and associate director of fitness and recreation at Curry, believes that “running programs like this that are fun and interactive really gets people to think about consent and learn about what consent actually is and what a sexual assault is.”

Programming made it clear that women aren’t the only ones who are victims of sexual assault. Men can also become victims as easily as women can. Cam Hoyt, a freshman psychology major and an executive board member of R.A.G.E., said his group worked hard this year to keep Consent Day gender neutral.

“Last year, a lot of the stuff was pink, so people thought it was just for women,” he said. “But we want to let people know [sexual assault] does happen to men, too.”

Rachel King, associate dean of students, said she believes that the lessons of Consent Day are “incredibly valuable.” For example, just because you’re in a relationship with someone doesn’t mean that there is consent for sexual activity.

Research indicates that alcohol plays a big role in sexual assaults on college campuses. One of the things students learned during Consent Day was that a person is typically in no condition to provide consent when they are under the influence of alcohol.

The college will hold another event geared toward educating students about sexual assault, on April 1 at 7 p.m. in the Student Center Gym. Filmmaker and activist Byron Hurt will speak about confronting sexual violence on campus.