All college students face the challenge of juggling different aspects of their lives. With classes, homework, family and social activities, days can sometimes seem overwhelming. For athletes, they can be downright dizzying.

Carolyn Houston, a junior from Melrose, N.Y., knows all about that. In addition to a demanding academic schedule as a nursing major, Houston is co-captain of the Curry women’s basketball team. 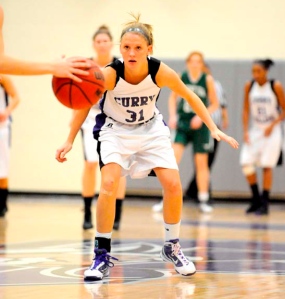 Carolyn Houston, like many of her teammates, must juggle the rigors of her nursing studies with basketball. // PHOTO COURTESY OF CURRY ATHLETICS

“Although it makes me a well-rounded person, it feels like there are not enough hours in the day,” Houston said. “Going to nursing, lunch, class, practice and then the library is my typical day.”

According to women’s basketball head coach Francis Elms, Houston is “the whole package.” She “has a high basketball IQ and she’s tenacious on defense.”

Her off-the-court IQ isn’t too shabby either. The junior said her nursing course work requires long hours of studying and a fair amount of stress. Houston gives credit to her mother, a nurse at the Albany (N.Y.) Medical Center, for getting her interested in nursing as well as finding enjoyment in assisting others. “I love medicine and I love being able to help others,” said Houston, noting that she hopes to work in a hospital for a year or so after graduation before pursuing a master’s degree to become a nurse practitioner. “Although it’s pretty stressful, it’s very rewarding to me, which makes it worth it.”

When choosing which college to attend, her finalists were Curry and Utica College, located in upstate New York and about 100 miles from her home. Houston said she chose Curry because of its great nursing program, but she initially regretted her decision.

“When I was a freshman, I almost wished I had picked a school closer to home because I was terribly homesick,” she said. “The first three months of school were God awful for me.” 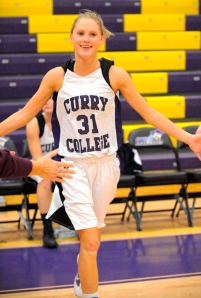 Hailey Rafferty, her fellow co-captain on the basketball team, is the main reason she’s still at Curry today. “She made my freshman year so much more enjoyable,” Houston said. “She stood by my side and let me cry on her shoulder. I don’t know what I would have done without Hailey.”

While nursing and basketball may seem different to the outside observer, the 5-foot-10 forward believes the two have a lot in common. “They both require discipline, hard work and lots of focus,” said Houston, who averaged 7 points and 4.5 rebounds per game last year. Through five games this season (a 1-4 team record), as of press time, she’s averaging 6 points, 7.4 rebounds and 2.6 assists. Elms said Houston frequently guards the opposing team’s best talent, and often matches up against players much bigger than she is.

Off the court, Houston said she likes to hang out with friends, go shopping, get her nails done and relax, something she rarely has time for due to her academic schedule.

There are several nursing majors on the basketball team—juniors Julia Scrubb and Rafferty, sophomore Katie King, and freshmen Lindsey Dionne, Jeanette Fallon, Katelynn Gaughan, Kylie Beltz and Jessica Kender—and Elms said he fully understands how difficult the balance can get.

“Nursing is a very demanding major, but regardless of what they’re doing, they have to work hard and learn that they’ll never be able to take shortcuts,” he said. “Student athletes need to be able to succeed in the classroom as well as on the court.”