The next time you’re out and about on campus, be careful. You may find yourself stuck in the middle of a “dance off.” 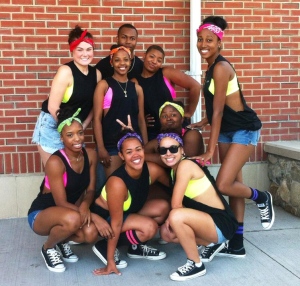 There are 34 students on camps who participate in one of Curry’s three dance groups. // COURTESY PHOTO //

OK, the Jets and Sharks of Leonard Bernstein’s 1957 Broadway musical “West Side Story” aren’t around. Neither are the dance troupes of Austin Powers and Britney Spears, as seen in the movie “Goldmember.” But dance has become a growing passion at Curry, as evidenced by the fact there are now three different student dance clubs.

Thirty-four students, all female but one, make up the three dance groups at Curry. Open to both men and women, The Curry Dance Team, Multi Essence and M.O.T.I.O.N. Steppers each have their own style and swagger. M.O.T.I.O.N., a step-dancing group, received club status this semester by the Student Government Association. M.O.T.I.O.N. stands for “Motivated, Outspoken, Talented, Intelligent, Original and Natural.”

“Each new group brings an opportunity for students to practice and engage in that particular style of dance,” said Michael Giacalone, coordinator of student clubs and organizations in the Student Activities office. “I think it provides a richer community for our students.”

Alissa Cardone, an assistant professor of dance at Curry, said dancing has become a much more mainstream art form over the years. The college offers an academic minor in dance, and is working to hire an additional faculty member for next year due to increased student interest.

“Continuing to dance in college for many students is extremely important,” said Cardone. “Why? Because they love it! Dance is a meaningful and rewarding experience.”

None of the student clubs’ histories go back that many years. The Curry Dance Team was formed in 2007, and routines consist of hip-hop, ballet, tap, jazz and contemporary dance. Today, they have 14 members and recently competed at Westfield State University and Bridgewater State University.

“We are a tight-knit group,” said Aimee LeComte, a senior early education major and secretary/treasurer of the Dance Team. “With our enthusiasm and spirit, we bring the party!”

Added Club President Melissa Manning, a junior criminal justice major: “All the girls do it because it’s fun. But obviously that competition aspect is still there.”

Last February, The Curry Dance Team was joined on campus by Multi Essence. According to Tuzde Nazaire, a senior criminal justice major and vice president of Multi Essence, the group has 10 members and specializes in a fast-paced style, with a mixture of hip-hop, upbeat rap and R&B. They’ve already performed at events at Roxbury Community College and Central Connecticut State.

“People say, ‘What’s the point?’ when they find out there are two dance teams,” said Nazaire. “But they are two different styles. It’s good that Curry students have options.”

At such a small school, a rivalry of some kind is to be expected. After all, both groups perform at similar venues, including the Powder-puff football game and March Madness, as well as at off-campus performances. Yet, both teams claim there is no competition between them. They’re simply too different in style.

“You can’t compare the teams when you represent two different things,” said Jasmine Jackson, president of Multi Essence and a senior psychology major.

Members of The Curry Dance Team agree. “They know how to make things go smoothly,” said LeComte. “We dance for fun while they dance for a structured performance.”

Still, when asked about how they felt about the other groups, those interviewed for this story tended to smirk and look around, careful not to say anything bad about the other teams. Competition takes many forms.

Adding to the mix are the M.O.T.I.O.N. Steppers. Neila Rene, a sophomore health major and secretary of M.O.T.I.O.N., said the group intends to bring “something different to Curry that no one has seen before.”

Although some members of the newly created step team were interested in joining Multi Essence, they decided to focus on “step,” which involves precise and rhythmic dance routines that include clapping, stomping and the occasional prop.

“We are the next big thing!” said junior communication major Larissa Sloan, a M.O.T.I.O.N. member.

Be aware of your surroundings, Curry students and faculty. You never know when a “dance off” just might ensue.