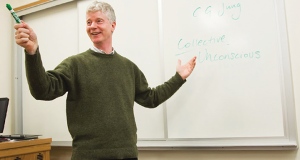 The saying “Don’t judge a book by its cover” is as old as it is cliché, but in the case of Professor Allan Hunter, it really is fitting.

With gray curly hair and a British accent, he is a living caricature of an English literature professor. But there is far more to the man than meets the eye.

For instance, Hunter is a motorcycle enthusiast. He has restored nearly 20 antique motorcycles and is an avid rider. Hunter even has his own YouTube channel, where some of the videos feature the professor in a black leather jacket and blue jeans talking about motorcycle issues.

“I like the hobby because I like to use my hands to repair things, especially after a whole day of using my head at work,” says Hunter, who has written seven books, including the recently published “Spiritual Hunger,” which examines the myths and rituals that shape people’s daily lives.

Born in southeast England, Hunter moved around a lot as a kid because his father, Jim, was a member of the Royal Air Force. They lived in Madagascar, Belgium and Italy before eventually returning to Britain. Hunter says all the moving around was exciting, but it also took its toll on his family.

“Ultimately, one felt slightly rootless,” he says. “A military family always puts the father’s job first, and the family second. I’m not sure that this is the best balance. I prefer in my own life to put the family first.”

The Hunter family eventually returned to England, and Allan earned his doctorate degree in literature from the famed Oxford University there. He also helped his father write a memoir, and the experience taught Hunter so much more than just the art of storytelling.

“My father’s memoir helped him to unearth things he had never talked about, and in the process of writing about them he was able to heal them,” says Hunter, noting that his dad, beginning at age 21, spent four years in prison camps during World War II. “The entire process of writing brought him to a place of greater peace, and I was proud to have been part of that healing in some small way.”

In 1986, Hunter made his way to the Boston area in search of an academic job. He soon landed at Curry and has been at the college ever since. In addition, Hunter has worked with area adolescents and Massachusetts prisoners, helping them work through past personal traumas with the power of writing.

Here at Curry, Hunter has taught an array of classes, including one on the Grimm Brothers’ tales. He has also written extensively on the subject of “Disneyfication,” which is Hunter’s way of critically analyzing longstanding Disney stories.

“The tale of Cinderella, in Disney’s hands, seems to say that Cinderella is praiseworthy because she sits around until a fairy godmother comes to rescue her,” says Hunter. “She does almost nothing for herself in Disney’s version. This has actually given rise to a syndrome in young women, called the Cinderella syndrome, in which young women feel they have to be passive and live in expectations of someone else making their life happen for them. ‘Some day my prince will come’ is not a recipe for active exploration.”

According to students, Hunter’s ability to get them to think and feel is what makes him so special.

“His insight into the human emotion and how it connects to literature has shown me how to think beyond what is on the page and look at the whole picture,” says Maryellen Walsh, senior English major. “He truly is a visionary and a large part of what makes the Curry English program so unique.”

Andrew Blom contributed to this article.