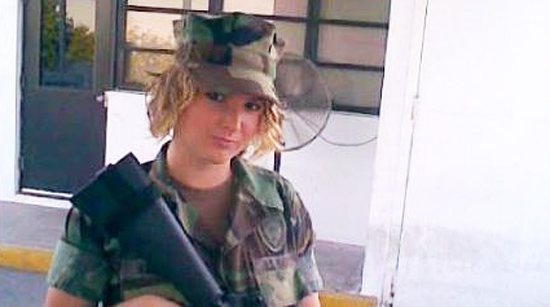 Coming out of high school, Shannon Wallace enlisted in the Navy because she didn’t believe she had what it took to succeed in an academic atmosphere.

Many years later, Wallace is now on schedule to graduate this month from Curry with a bachelor’s degree in nursing.

“When I first got here (in 2010), I was just trying to pass,” said Wallace, who has routinely made Dean’s List and is a member of Curry’s Alexander Graham Bell Honors Society and the international nursing honors society, Sigma Theta Tau. “Now, I just want to see how far I can go.” 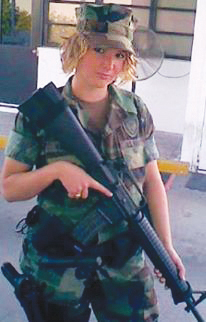 Wallace, 25, graduated from Vernon Hills High School in Illinois in 2007 and enlisted in the Navy. She went to boot camp in Great Lakes, Ill., where she was trained as military police, because she had an early interest in criminal justice work. Wallace said military police officers were responsible for conducting uniform and weapons inspections, base security, and the generally management of all Navy personnel, among other things.

“It was kind of like being an RA,” said Wallace, who was named Curry’s “Resident of the Year” in 2010-11 and has served as an RA over multiple years here. “You have to come down on people. You have to follow rules and make sure everyone on the base is safe.”

Following boot camp, Wallace spent time on a few different military bases around the country before being deployed to Iraq and, later, to Kuwait. She remained a military police officer throughout her time abroad. She left the Navy—Wallace served for six years total, three in active duty and three in the reserves—as an E5 2nd class petty officer.

After the military Wallace decided she wanted to be a nurse. She made the decision because she had always been interested in the medical field, and criminal justice got to be too stressful. “I couldn’t see myself sitting in a cop car all day,” Wallace said. “I’m a nurturer and I have always loved taking care of people.”

Wallace had known about Curry since her junior year of high school. Vernon Hills offered a course for students with learning disabilities, and the teacher told Wallace about the PAL program here. Wallace applied to the nursing program at Curry, but was placed on a waiting list. She reapplied a year later and was accepted. In fact, Wallace received her acceptance letter when she was still in Iraq. Even though Wallace has dyslexia, she is not in the PAL program.

“I come to class like it is work,” said Wallace, who has also been a member of the cross country team. “I’m terrified of turning in anything late. I am a better problem solver now, too. Joining the military gave me a chance to step back and see what is happening in my environment. I realized that I want to do something that I really love.”

According to Cathleen Santos, a nursing professor at Curry and Wallace’s health policy instructor, “Shannon is always engaged in the classroom. She is the first to ask a question and the first to give an answer.”

Wallace said she wants to eventually earn a master’s degree in nurse practitioning, and then get her DNP (Doctorate Nurse Practitioner) because she would love to teach at the collegiate level one day.

Professor Santos has confidence that Wallace will excel in anything she puts her mind to.

“[Shannon] forces herself to succeed,” Santos said. “She is always at my door looking for ways she can improve. She is driven and motivated and she has found her passion for learning.

“Shannon is absolutely a role model for younger students, with her drive, work ethic, motivation, determination, and perseverance. She is a role model for people in general. I admire her myself.”

One thought on “From Kuwait to Curry and Beyond”