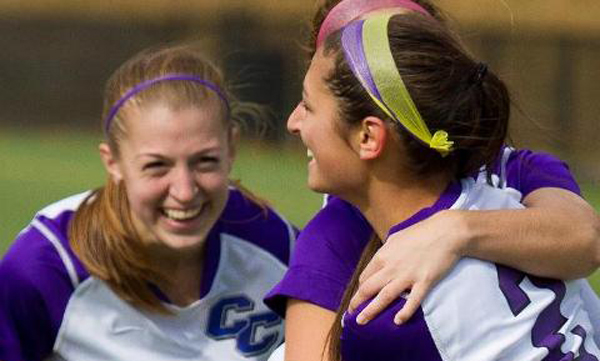 The Curry College men’s soccer team had some ups and downs this year. The Colonels finished the regular season with a 7-7-4 record, good enough to earn a spot in the Commonwealth Coast Conference tournament. However, Curry exited in the first round, losing a close 1-0 game to Western New England University.

Sophomore forward Matt Cotnoir led the team offensively with seven goals, four of which ended up being the game winners. Cotnoir also added eight assists, which was half of the team’s total. Junior Nick Gilman and sophomore Tim Stein each finished with four goals. Senior goal-keeper Nick Barber started all 19 games for the Colonels and posted a save percentage of .859. Barber had 159 saves this season and five shutouts.

The Curry women’s soccer team got off to a strong 5-1 start. Unfortunately, the Colonels won only one of their final 13 games and fell to top-seeded Endicott College in the first round of the Commonwealth Coast Conference tournament. The team finished the season with a 6-11-2 record.

Freshman midfielder Kaitlyn Lima led the Colonels with 11 goals—including a hat trick in a 3-2 win over Salve Regina University—while nine players were tied for most assists with one apiece. Sophomore Taylor Evans and seniors Brittney McLaughlin and Alayna Coakely had three goals apiece. Senior goalkeeper Hayley Lorge posted a .805 save percentage and had 161 saves in 19 games.

The cross country team posted three top-10 finishes this season and placed seventh out of 10 teams running in the Commonwealth Coast Conference championships in early November. The Colonels also competed in the ECAC Division III Championship and placed 40th out of 47 teams. Sophomore Megan Erickson led the way for Curry in that 3.7-mile race, held in Bristol, R.I., with a time of 27:10. Classmate Leigha Sweeney came in just two seconds later. With five freshmen on this year’s team, including a top performer in Abigail Ceresi, and only one graduating senior, the squad will surely improve in the upcoming years.

The volleyball team ended the fall season losing eight of its last nine games and finished with a 9-18 record. Freshmen Nicole Grambley led the team with 199 kills, while classmate Alyssa Keeney was not far behind with 165 kills. The next closest was junior Emily Boudreau with 89. Junior Hannah Robison led the squad with 287 assists. Freshmen Kayla Greeley and Makayla Hughes each had more than 100 assists, and classmate Lauren Gaffney led the team with 392 digs. Like the cross country team, Curry’s volleyball squad is loaded with young talent, featuring eight freshmen and no seniors.

The women’s tennis team finished the regular season with a 10-6 record. The Colonels started the season strong, winning seven of their first 10 competitions and earned a spot in the Commonwealth Coast Conference tournament. However, Curry was eliminated by Gordon College in the first round, 5-2. Sophomore Kimberly Love finished the season with a team-best singles record of 11-3. The Colonels’ top duo in doubles play was Love and senior Megan Mulrooney, who won eight matches and lost four. That pair, as well as seniors Emily Mongello and Lauren Chuha, earned Curry’s points in the conference tournament against Gordon.

Mulrooney was named to the second-team All-CCC squad for singles, while Mongello and Chuha were second team in doubles.

The football team ended the year with a 4-5 record (4-3 in NEFC). The Colonels started the season slowly, losing their first three games before winning the next two, beating MIT and Coast Guard Academy. The team then dropped its next two games before ending the season with two wins, over Nichols College and Maine Maritime Academy. The Colonels started the season with 25 seniors, but ended it with just 15 due to various injuries.

Senior quarterback Kevin Fruwirth threw for 2,223 yards and 24 touchdowns. Fruwirth averaged 247 passing yards a game. Senior running back Phil Bigelow was the Colonels’ leading rusher with 598 yards, while junior fullback Jordan Shairs was the top receiver (55 receptions for 517 yards and eight receiving touchdowns). Shairs was named to the first team of the All-Conference squad, while Fruwirth earned second-team honors.

Defensively, junior middle linebacker Jose Rodriquez led the team with 55 tackles, 33 of them solo, and one interception. Junior defensive back Kyle McKay and sophomore linebacker Curtis Davila were tied for the most interceptions, with three each. Senior defensive lineman Sam Calley received second-team All-Conference honors.