Rozene-Wolski’s “director’s note” clarified that the modern sets, wardrobes and props served to remind the audience of the tale’s timeless nature, sadly recurring throughout history. The story of “The Trojan Women” was brought to life by an imaginative cast and crew 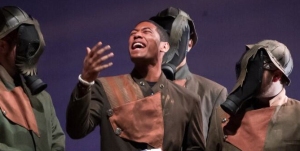 Juniors Nick Doonan and Ryan Gibbons opened the show as Poseidon and Athena, quarrelling following the conclusion of the battle that would annihilate Troy. Doonan’s booming soliloquy catalyzed the performance, and Gibbons complemented him as the thoughtful, articulate Athena.

Junior Megan Cole and sophomore Sandra O’Donnell showcased two starkly contrasting emotions in their performances. Cole’s Andromache, daughter of Hecuba, is grief stricken as her husband, father and sibling lie dead in the streets. The taking of Andromache’s newborn son represented a tragic peak in the sorrow-filled performance.

Conversely, O’Donnell’s manic Cassandra, Hecuba’s other surviving daughter, is driven to insanity after the destruction of her home and slaughter of her people. She flickers between pledges of vengeance and admissions of her desire for the power she will inherit as Agamemnon’s new mistress. Her frantic dancing and prancing was a highlight of the show.

Also prominent were freshmen Hazer Bello-Infante, who brought swagger to the role of Menelaus, and Megan Kosciak, Menelaus’ former bride Helen. The two formed a tremendously complementary pairing and exhibited remarkable chemistry in their time on stage.

The supporting cast and chorus of Greek soldiers and Trojan women underscored the entire performance with beautiful singing and powerful acting, and the execution of the crew backstage was flawless.

The culmination of so many moving pieces was a moving and strong performance all around.