Army of One: Hockey Player to Join New Team

Shane Tracy is not your typical college student. For starters, he’s a 20-year-old freshman. A native of Bow, N.H., Tracy is studying management at Curry, plays on the hockey team, and holds down an on-campus job through the intramurals program.

And unlike many other college students, he has a detailed plan for this future. It involves wearing fatigues.

“I’ve wanted to join the Army since I was about 15,” says Tracy, who currently serves in the ROTC program at Curry, which is run through Boston University. “I don’t know why I wanted to join, to be honest. I feel like it is where I belong and what I’m supposed to do. I guess that I just felt that it is what I would be best at because of my athletic and team-based background.” 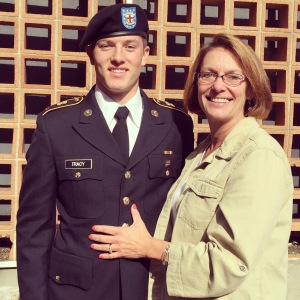 Tracy, who played junior hockey in New Hampshire before attending Curry, played in 17 games for the Colonels this past year. A midseason broken wrist limited his playing time, but the forward finished with one goal and five assists.

Although Tracy cannot pinpoint his motivation to join the Army, military service certainly runs in his family. Both of Tracy’s grandfathers served in the armed forces, and two of his uncles flew helicopters and planes in the military. His father, Mike, is a pilot for Southwest Airlines.

Tracy says he has already learned a lot through the ROTC program, including Army tactics, leading platoons, and the arrangements of soldiers. Cadets learn how to do security patrols, provide medical and first aid treatments, work through navigation and mapping, and are taught Army values and leadership skills. Tracy says he wants to become a commissioned second lieutenant after graduating from Curry.

Because he’s on a sport’s team here, Tracy does not have to attend the required three-day-a-week physical training exercises that non-athletes have to do. Instead, he “only” attends ROTC class for two hours once a week. However, Tracy knows the schedule will become more demanding as he progresses in the program, and that it will become harder to juggle all of his on-campus activities and responsibilities.

“I work as well to help pay for everything, so I have to juggle that too,” Tracy says.

Tracy was awarded an ROTC scholarship this year. He was approached in November of 2014 by one of his ROTC instructors, Captain Jennifer Whittle, who suggested he apply. Based on his involvement with the Ranger Challenge team—a unit that competes against other ROTC programs—his 3.5 GPA in high school, and his standing 4.0 GPA in college, he more than qualified.

“Obtaining a three-and-a-half-year scholarship is very difficult,” says Tracy of the Line’s Scholarship. The scholarship grants him a full-time active duty spot for a minimum of four years after he graduates from college, and helps pay for his college tuition and other expenses.

Ranger Challenge teams consist of the top cadets from each ROTC program. Tracy explains the competitions as physically and mentally demanding challenges that often requires cadets to be on their feet for about 15 miles with 45 pounds of gear on their back as they do obstacle courses and other physical challenges, like a log carry and a Humvee push.

On Feb. 13, Tracy was at the center of attention during Boston University hockey game. He and four other cadets walked onto the bench during a period intermission and were officially sworn into the Army as they raised their right hands and recited the soldier’s oath.

“Shane has always made me very proud,” says his dad. “He always works hard, whether it be school, athletics, or work…he always strives to be the best. The future is no different. We are proud he has chosen to serve his country and that he worked very hard to achieve an ROTC scholarship from the Army.

“Shane loves being part of a team,” Mark adds. “And what greater team is there than a military unit. He enjoys the camaraderie and challenge of being a teammate, and thrives in those situations. There is a parallel to what he has done his whole life with hockey.”