Coming into this past weekend sitting at 1-5 in the conference, the Colonels hoped to sweep both doubleheaders (one at Nichols on Saturday and Sunday’s with RWU) to bolster their playoff chances.

After splitting Saturday’s doubleheader, the team arrived at the field hungry for the playoffs Sunday.

Curry’s head coach Dave Perdios knew his boys wanted it. “We were in the gym this morning at quarter of nine hitting,” he said, and added he didn’t even mandate it. 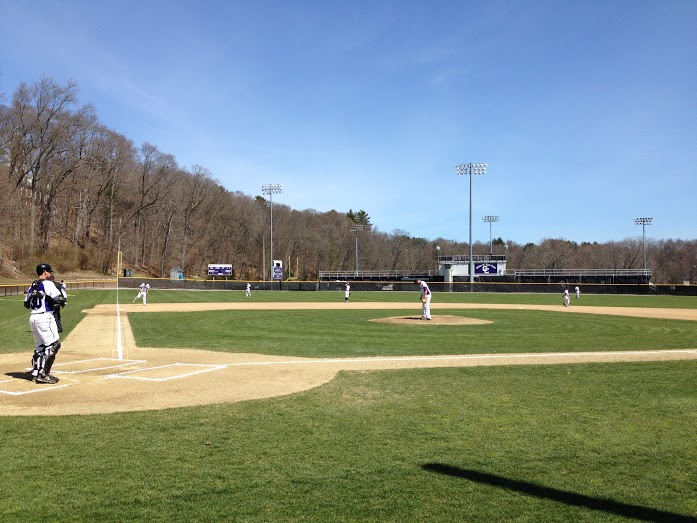 The first Roger Williams batter, Liam Smith, reached on an error by sophomore shortstop Will de la Cruz. A hit and run was called for the next batter, Eli Camner, taking de la Cruz out of position and allowing both runners to be safe at first and second. After another single from Chris Bosco loaded the bases, the floodgates cracked.

Matt Moskal drove in the first run of the game for the Hawks with a sacrifice fly to left field, scoring Smith and leaving runners on the corners. A stolen base put both of them in scoring position, and both runners would score (one unearned) before Burke escaped the inning, down 3-0.

Burke knows RWU well enough to have anticipated the offense.

“I know they can hit so I wanted to have them put the ball in play and that’s what I did so I’m happy,” said the junior. “The way it came out obviously wasn’t what I wanted but I knew my game plan was to go out there and throw strikes and sometimes we make plays and sometimes they make a play, that’s just what happens.”

The right-hander allowed his defense to make plays the rest of the day, scattering six hits, while also taking matters into his own hands with nine punch-outs and only three earned runs (three unearned) in a complete game. 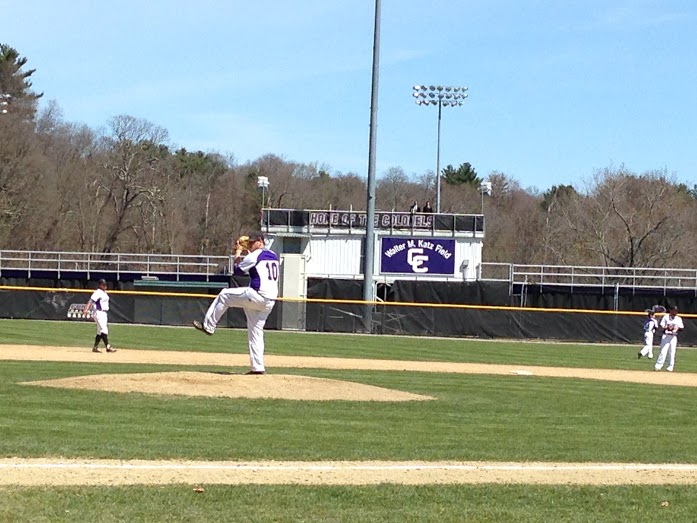 After the third, the bats were quiet on both sides until top of the sixth when the Hawks started things again with a double and a bunt to put runners on the corners. One swing of the bat from Shawn Cariglio made it a 6-0 game.

Burke responded by retiring the next three batters to turn the show over to the bats for the Colonels to no avail. Curry registered only one more hit and two base runners over the final two innings before the 6-0 score went final. 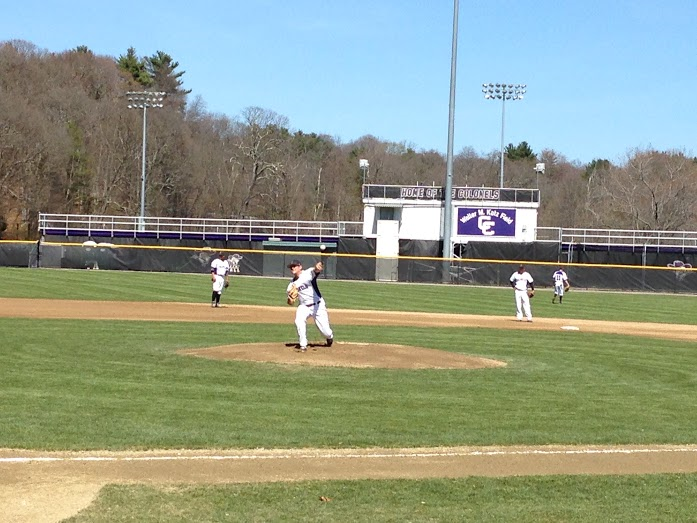 Alex McLean took the ball for game two, in need of a W // Photo by Cole McNanna

Junior Alex McLean got the nod for the Colonels in game two.

He cruised through the Roger Williams lineup the first time through and sat down all nine – two by way of the K – before the second inning was over, to bring up the other half of his battery, and classmate, Nick Crivello.

After fouling off a few and seeing two balls, Crivello swung and seemingly tipped the ball back to the catcher where it hit his glove and popped out; a play normally ruled a foul ball. However, the home plate umpire neither saw nor heard any contact, making it a swing-and-miss and dropped third strike which allowed Bosco to tag Crivello out.

He did not like the call and threw his helmet into the dugout and was swiftly ejected from the game. After much pressure from Coach Perdios the umpire conferred with his field counterpart. They eventually agreed that it was a foul tip and Crivello was reinstated in the game with a 2-2 count still on him.

Crivello saw two more balls and was given a pass to walk to first base by the same umpire who had ejected him some five minutes prior.

Since Crivello was still in the game, he had to return to his spot behind the plate to catch for McLean, right in front of his favorite umpire. “Oh I have great relationships with all the umpires,” Crivello said with a chuckle generating snickers from nearby teammates Burke and McLean.

“I talk to all of them, I never shut up…I like to have a good conversation; make them laugh, see where they’re from see what they like to do, that type of stuff.” [Editor’s Note: I dare anyone reading that quote to not hear shades of Ham from The Sandlot]

Crivello was eventually stranded at first base and the Curry bats were quiet until the fourth inning.

Freshman Jack Kallinich got things started (unconventionally) when he was drilled with a pitch in the arm to put the first runner on. Classmate Ben Lary capitalized on another Hawk mistake, reaching on an error to put two runners on for senior captain Tim Lathrop. In just his 11th at bat of the season, Lathrop stroked a single through the left side to plate Kallinich and start a two-out rally.

Classmate and co-captain John Arens followed suit, delivering an RBI single of his own through the left side to bring in Lary. Both seniors advanced on a pass ball but wouldn’t need the free base as the other senior co-captain, Kyle Connors, cleared the bases with a triple to the fence in right-center field.

McLean saw all the fun they were having and, wanting to get in on the action, produced an RBI single to left to help his own cause. Once the Hawks finally got the third out of the inning, the Colonels had put up five runs.

McLean was getting it done at the plate and entered the fifth with a no-no intact.

“I just looked to keep batters off balance, mix up pitches, make sure we’re throwing outs and letting our defense work,” the soft-spoken McLean said.

He was able to do just that until the second batter of the fifth inning muscled a flare to center field to record the first hit of the game. It would prove costly, as he was the runner who came around as the lone RWU run.

The Colonels offense left two runners on base in their final at bats, but wouldn’t need the runs to score due to McLean’s effort at the end of his outing. After letting up a leadoff double, he stranded the runner on third base and got three straight outs to keep Curry in the playoff hunt.

McLean finished the game having let up only three hits and one earned run while striking out six. After the game he said, “This is huge because if we got swept today we would have dug ourselves an even bigger hole to come out of than what we have already.” He added the win was a “huge morale booster.”

Perdios backed up his pitcher’s thoughts and said, “The second game was huge, we played some defense and we hit the ball when we needed to and the pitching was excellent. The formula is simple; these guys have worked very hard with the hitting.”

He also acknowledged that this game could have saved their playoff hopes because, “if we had lost that second game today, our season probably would have been over as far as playoffs are concerned.” Perdios added that, “We’re still in the hunt and we control our own destiny now.”