This season is the beginning of something new but is also the end of a chapter for the Curry Colonels men’s ice hockey team.

This year marks the opening season of Men’s Ice Hockey being a championship sport of the Commonwealth Coast Conference. It’s also a chance for fifth-year head coach TJ Manastersky to be the first men’s hockey program to get an automatic bid to the NCAA tournament with a win of the CCC. 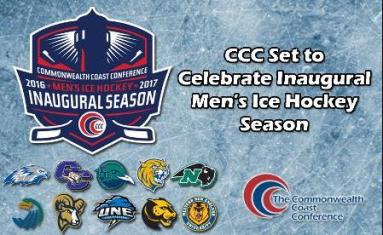 Photo from the Commonwealth Coast Conference

Coach Manastersky has 24 returning players this season, 11 of whom are now seniors. They are also the first class that he recruited himself. Both Manastersky and his recruits “came here looking to build something.”

This year is the last chance the
se guys have to make their mark on the program. Although it may seem like the same story every year with seniors coming and going, after last year’s disappointing exit in the semi-finals of the ECAC tournament, they look to “finish the story the way we want it to,” said coach.

Manastersky made his excitement known for the new players that he has this year on top of his returning crop. He emphasized that they’re going to have opportunities to be successful, but they won’t go through the same process that his now-seniors went through.

“If you look at the senior class, when they came in as freshmen they were thrown in the fire,” Manastersky said. Despite that flame’s intense heat, he explained that is how every one of his players learned to grow.

Now, with the knowledge his players have after their roller coaster tenure, he can say that his team has the needed depth. That strength is able to help mold the new players into the exact type of characters this Colonels’ chapter needs to be able to finish on the right page.

The returners are again bringing the same commitment to the team as they understand that is a part of teaching the younger players how to do the right things. Manastersky said there is nothing specific they need to change compared to last year, just make what they already have, even better. He trusts his players to know the process and stick to the basic skills, and be great at those skills.

One big difference is that they’re going to start this season fully healthy, “which is something we never were last year.” However, last year is last year, and that’s the important piece to remember.

When Manastersky was asked about going up against the nation’s third-ranked DIII school according to the USCHO in UMass Boston?

Not much needs to be explained after that.

Curry matched up well against them last year and even held the lead at one point, which deserves to be recognized. Only, the way that Manastersky sees it, his team matches well with anyone.

The Colonels also welcomed a new coach to their family. Decorated professional Mike MacDonald joins the coaching staff after stints in the Central Hockey League and the Southern Professional Hockey League, and will bring more experience to the team in their fight for the CCC.

It all starts tomorrow, Saturday at 4:45 p.m. at the Max Ulin Rink, just down the road from campus. If anyone interested in going to the game but doesn’t have a ride, a fan bus drops students off and picks them up after the game. More information can be found at the Student Center Information Desk.