There’s Still Time to Donate to The Movember Foundation

After all the turkey, all the desserts, all the awkward conversations with family or high school classmates you didn’t want to run into, it’s finally time to shift our focus to the end of the semester.

But not so fast! Swiper no swiping!

There’s still three whole days left in the month of Movember to give a donation or start a conversation about Men’s Health.

And on top of that, there’s three more days for me to fully focus on growing my beard back instead of just focusing on my mustache.

I’ve been going all month long with only a mustache that still has not grown to the same magnitude of my father’s (it’s okay because he’s got 30 years on me). But I’ve also been raising funds for Mental Health, Suicide Awareness and Testicular and Prostate Cancer.

I wanted to make a statement by ditching the beard I and everyone around me had grown so accustomed to over the past year and start fresh in mid-October by turning myself into a hairless cat.

I wanted to start talking about something that meant a lot to me in prostate cancer. I then teamed up with my barber who helped me make that hairless statement, and found causes that were just as crucial.

The McNannna Family; the men showing off their facial hair proudly. // IMAGE BY COLE McNANNA

As I may have mentioned before, my father had prostate cancer two winters ago which has since been fully eradicated. I’ve had the opportunity to make a few speeches about prostate cancer and found out a lot of information.

Like how your odds of getting the disease go up if you have several affected relatives (I have three) and how easy it really is to pass down prostate cancer when it’s been in a family for so long.

Yeah, researchers from the National Center of Biotechnology Information have found that, “In some families, the hereditary pattern is so strong as to mimic an autosomal dominance trait.” So basically the same as passing down blue eyes. But that conversation is a little easier to have.

According to their own statistics, on average, around the world, one man commits suicide every minute of every day. Too many men are ‘toughing it out’, keeping their feelings to themselves and struggling in silence. 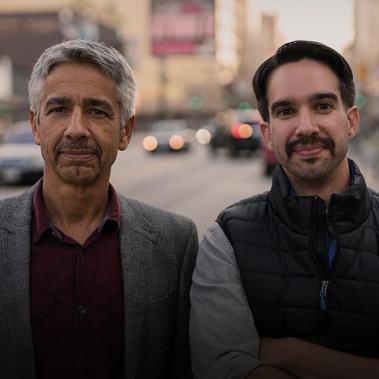 Andrew Perez, whose father also had prostate cancer, has raised over $10,000 in the eight years since he beat Prostate Cancer. // IMAGE BY MOBRO

Like I’ve been telling my Public Speaking class, someone in our lives has been affected by one of these issues one way or another. Maybe you have, maybe your cousin has, maybe your best friend’s uncle’s son’s nephew has; who knows? Only you.

So maybe you don’t have money to give me, that’s completely fine, I understand. We’re all in college and it ain’t easy. In that case, I ask you to follow my social media and stimulate conversations about these causes.

Sometimes, those simple conversations make leaps and bounds to those affected. Any little effort to move forward does more than you’d think.

So give me a penny, give me one, two, 20 dollars it doesn’t matter. It’s not all about the money, it’s about the conversation.

Stop shaving, share the link, retweet me, like my selfie, do all of it, do none of it…Just don’t stop talking about Men’s Health. Help us stop men from dying too young.