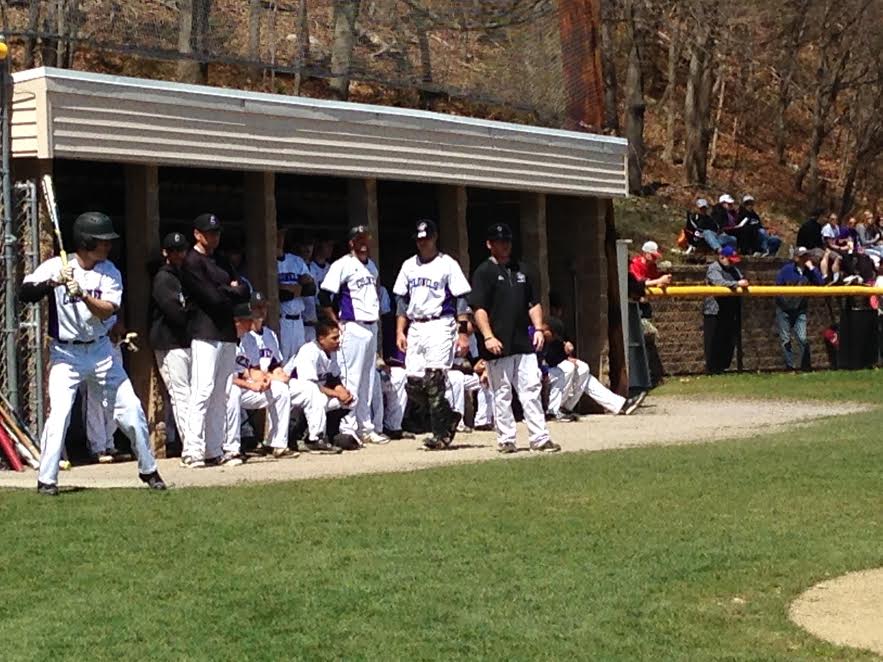 The long-awaited home opener at the Jack Vallely Diamond saw both of the top starters in the Colonels’ rotation start a conference doubleheader against Eastern Nazarene College.

Junior David Griffin picked up his second win and first complete-game shutout of the year in Curry’s 1-0 victory in game one. The win put them at 2-1 in the Commonwealth Coast Conference, and in good shape for the ladder half of their doubleheader.

“These doubleheaders are brutal,” Head Coach Dave Perdios said postgame. “If you don’t win the first one it puts the pressure on.”

Sure enough, it was the Lions who applied the pressure early on with Andrew Santora swinging at the game’s first pitch and connected for a lead-off double.

“It was a two-seamer that I left over half of the plate and he was expecting fastball,” said starting pitcher Dave Griffin.

He was able to eliminate the threat however, and went on to retire the next three batters to get out of the inning unscathed.

An inning later, with the bases empty and no one out, senior Vincent LoPriore provided the Colonels with the only run they needed.

LoPriore lifted one deep to left and took advantage of the howling wind which sent the ball flying to the bleachers to give Curry a 1-0 lead.

That was more than enough support for Griffin, who went seven full innings. He struck out four while only allowing four hits.

LoPriore, in his fourth and final year as a member of the Curry College baseball team, is in his first year as a position player. Formally a reliever, LoPriore has found a way to get his bat in the lineup as a first baseman.

Coach Perdios praised LoPriore for working hard in the offseason trying to find a new position. LoPriore currently leads the team with a .345 batting average.

It was seemingly a tale of two games as the final game of the two-game set saw fireworks from the Colonels’ bats and a parade of runs.

LoPriore was again in the mix, supplying a two-run single after junior Justin Cage delivered an RBI double to get things going in the bottom of the second.

An early lead for the sophomore stud Matt Fogarty was all he needed to start his day. Although surrendering a run in the following half inning, he was strong all day, finishing with four strikeouts over five innings.

The Curry bats came back to life and provided another three-run inning thanks to the bottom part of the lineup in sophomore Jack Kallinich, freshman Adam Duarte and senior Alex McLean. Fogarty went back to work for one more half inning and got the Colonels back to the dugout to get some more insurance.

Walks plagued Eastern Nazarene and Duarte grabbed another RBI after freshman Mitchell Carvalho was walked around the bases to make the score 8-1 with only two innings to play.

Junior Kevin Jones and senior Brian Burke came in from the bullpen after Fogarty and shut the game down, scattering two hits without allowing a run and fanning a pair to secure the sweep for Curry.

Both Fogarty and Griffin should have enough rest before Sunday’s non-conference doubleheader with Middlebury College, rescheduled from late March. The first pitch of those two games is scheduled for noon.