BY TYLER MILLIKEN and COLE McNANNA //

On Tuesday, Curry College opened its first name-brand retail service in the Hafer Commuter Café and the response on campus was overwhelming to say the least.

Mere minutes after opening, students and faculty flooded the coffee shop, as everyone looked to grab a treat before class. It didn’t take long for a line to be formed and with a blink of an eye it had grown out the door and wrapped around the corner.

For those of you itching to know, yes you can use your points here.

Although the full Starbucks menu is not available, a number of popular items are in stock in the Hafer Academic Building and there could be some seasonal flavors coming as well according to Manager Julio Perez.

The drink menu fills up three out of the four display boards showing the dining options, with the final one dedicated to their breakfast options and sandwich choices.

The menu in Hafer Café has been updated, so students can follow the products Starbucks is offering. // image by TYLER MILLIKEN //

Perez mentioned the entire staff completed a one-day training course called “Starbucks School” to become familiar with the menu and drink recipes. And though Starbucks is known for their elaborate drinks, it only took one day of classes for the staff to learn what’s what.

General Manager of Curry College Dining Services Keith Meal noted that it wasn’t random that Perez was the one sent to be in charge of the new coffee service.

“As we’re increasing retail I have to decide on responsibilities for the managers,” Meal noted. “Julio’s got some previous retail experience from when he was at Merrimack College and he’s very interested in learning more about the retail to help it grow.”

In conversations with Perez, he has shown his excitement for the operations occurring in the Hafer building and noted he has been enjoying the first few minutes of running the Starbucks. Perez also mentioned his enthusiasm about the food options and noted a new convection oven coming to campus.

A Merrychef Oven gives sandwiches a nice crisp toast to it and Perez was very excited about its arrival. It adds options to cater to more students and also adds plenty of flavor benefits as well.

Of course, perfection is not achieved overnight and some customers weren’t too happy with the wait. However, as the baristas get more experienced with the drinks, they should be able to pump them out faster and one senior was right on that train of thought.

At the end of the day, traffic finally slowed down inside of the Hafer Café. // image by TYLER MILLIKEN //

Garrett Riley, a senior communication major, is confident that Starbucks won’t be overcrowded every single day. “I’m not worried about the lines,” Riley said. “They’ll die down in a couple of weeks.”

It was impressive to watch such a turnout from students on a Tuesday morning after Labor Day, however. Senior communication major Evelyn Riley talked about the impact Starbucks might have at Curry College.

“I think it’s exciting because people have been awaiting the arrival of a brand-name on campus for a while,” said Riley. “Some students go out of their way to get Starbucks off-campus, but now they won’t have to look any further than the Hafer building.”

Meal noted that this addition had been in the works for a while after conversations with Student Government and a committee of students to help work with the dining services. The Student Culinary Council (SCC) was established to serve as the students’ voice in which dining options we receive.

Their work along with the Sodexo representatives and college administration put the program in place and now Meal wants more voices ringing in from the Council.

“We’re going to be recruiting for the SCC to get students involved,” Meal said. “As you can see a lot of this was student driven so we are listening, the college is listening, but we need more, we need them to come and talk about it so that more students are involved so it won’t be as big of a surprise.” 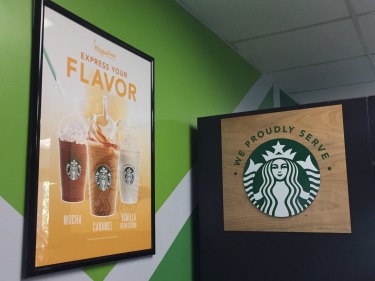 Hafer Café has redesigned their walls with Starbucks advertisements. // image by TYLER MILLIKEN //

Junior psychology major Ashely Dwarika was likely in the same boat as most students and was unaware of this SCC and shared her disappointment.

“I think that we should’ve got an opportunity to pick whether we wanted a Starbucks or a Dunkin Donuts,” Dwarika mentioned. “Let’s be honest, Starbucks is expensive, and we’re all college students. I feel like it’s unfair that we didn’t get to choose.”

Now, students can get in touch with Keith Meal at 617-333-2318 or you can email him at Keith.Meal@Sodexo.com to join the Council to have your voice be heard. “We definitely want more students,” Meal mentioned.

He also elaborated on the possibility of putting another cafe option in the new science building once it is completed but still knows there’s time before that happens.

“We’re looking at our new science building as well as the smart market café,” said Meal. “We’re looking at all different formats and this is where we want the students to be involved in the discussion so they can say, ‘yeah that’s what we want.’”