Tuesday evening, one alumnus of Curry College came back to campus to share pieces of advice to aid seniors getting ready to graduate and join the work force.

However, this accounting major did not have much downtime between graduation and his next step, the Masters of Business Administration.

Moussa Seck didn’t take an accounting class at Stoughton High School until his final year there despite having strengths in organization and math. In that time though, he fell in love and figured out that is what he wanted to do.

“I considered business interesting, but I didn’t necessarily know what I wanted to do,” Seck noted about his high school career. “I didn’t want to take a risk because first of all I didn’t have a direction so why would I risk something that I wasn’t too sure of? So I did something that would allow me to apply my skills anywhere.” 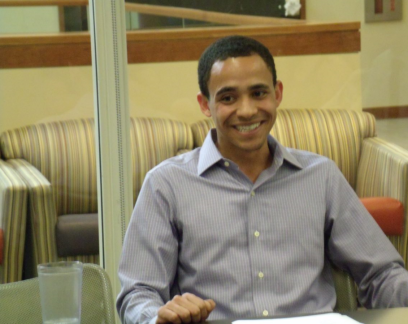 He was able to do just that when he started commuting to Curry College as a freshman in the fall of 2006. There he was able to set his whole course load for his eight semesters, organizing exactly what he’d have to do when.

After those four years, he wasted no time in both searching for a job but also continuing his education. In another two years he would finish his MBA at the same school he went for his undergrad, and also land his initial job offer.

Attending a networking event in acquiesce ended up being the first step that Seck took into the accounting world. He urged students in attendance to not think twice about going to events like those because of that one person you may meet that could lead to further interaction.

He was able to make that one important connection and started at CBIZ Tofias, one of the region’s top accounting firms.

“I ended up getting a job offer before I even graduated,” Seck recounted. “So I took the summer off then started working in August so I was working my first job and getting my MBA in tandem which was frustrating at times.”

In that case, Seck never had a time in his life where he was out of school and out of a job, a prospect foreign to many college graduates. However, within the accounting discipline, school is almost never out of the question as the 30-year old is still spending time in the classroom, this time at Boston College.

Seck also recently achieved CPA status, becoming a Certified Public Accountant, allowing his work in the public sector to soar. He has recently moved into the Real Estate sector and has worked on the new practice facilities for the Bruins and Celtics off I-90.

Another big project his firm, HYM Investments, has been working on is the renovation of Suffolk Downs which boats 14 million square feet of space. Seck noted the 20-year project will likely end up providing the area with a mini-city with residential, professional, and leisure opportunities all on site.

However, Seck would not have been able to get to any of these places had he not put in the work during his undergraduate career. Through the help of his professors and the Center for Career Development, he was able to secure an internship halfway through his eight semesters and was able to get a taste of what was to come.

He enjoyed the view and has since made plenty of experiences in a field that he enjoys. Now, he has taken the time to come back and talk to a few accounting majors who will be following in his footsteps and joining his ranks in the near future.

One thing that could help those students get to that point is joining Professional Associations specific to the industry, like the American Accounting Association (AAA). He noted that the people in those groups are all trying to help younger members find jobs so that they can reach the same positions that they’re currently in.

He also mentioned to keep goals for after graduation reasonable. Obviously students are not going to be looking for CEO positions as 22-year olds, but “find somewhere with room for growth,” Seck said.

He mentioned to find a place that will allow you to use your skills and climb the ladder so that you can later become that CEO that you wanted to be when you were sitting in SCRH. However, Seck also mentioned that it may not be as automatic as a flip of a switch.

“Not to come off as threatening but recognize that it is tough,” Seck explained. “It’s a matter of trying early and trying hard. Associate yourself with as many organizations and tools that are going to help you with this search as possible and don’t be lazy when it comes to networking because ultimately it comes down to who you know.”

At the end of the day Curry College has set their students up for success so once their eight semester commitment is up, they won’t have to be sitting on their parents’ couch for long. Moussa Seck is just one example of the stable of example Curry Graduates. What’s stopping you from being the next one?