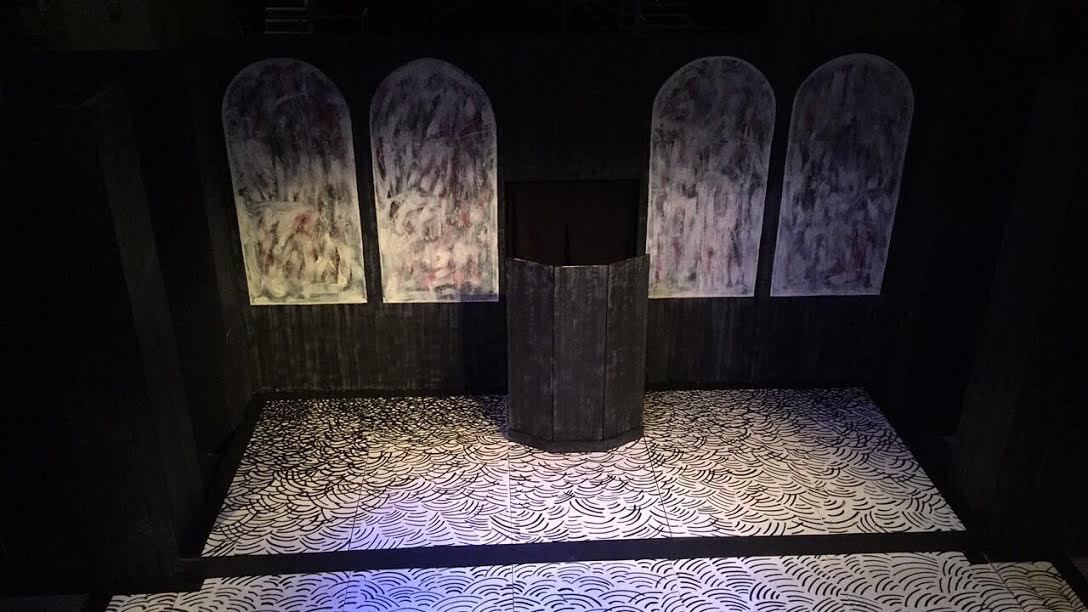 I would be lying if I didn’t say that “Gorey Stories” was better than I expected it to be.

Curry College Theatre presented the fall 2016 Black Box Production of “Gorey Stories” directed by David Miller based on the works of Edward Gorey.

This gothic comedy ran Saturday, November 12 through Monday, November 14 at 7:30 p.m. in the Keith Auditorium, with tickets being sold for $10.

Going into the show I was unsure how the cast was going to be able to pull together a series of poems and have it be interesting to the audience. After seeing the performance, I found it not only interesting but humorous.

Although given the name “Gorey Stories”, I would like to acknowledge the light humor the show had. There were a number of moments where the scenes were dark and heavy. However, this cast made it a point to add subtle humor throughout so that the audience stayed fully engaged.

Throughout the show the poems changed and so did the characters but that didn’t faze the actors of Curry Theatre. Their transitions were smooth and seamless. It was remarkable to see the actors come out as new characters and be completely in tune with what character they were portraying in that moment.

It was enjoyable to see an array of new faces this semester including: Brianna Aldrich (Freshman), Connor Carignan (Freshman), Kelsey Davis (Sophomore), Sara Jauhar (Freshman), Paul Mulvihill (Freshman), and Adrienne Wood (Freshman). With over half the cast being upheld by the underclassmen it lead me too expect the worst, however this cast wasn’t going to let that faze them.

Choreographer and senior communication major Meghan Kosiak stated, “We [Curry Theatre] pride ourselves on being a group for all. This cast is heavily made up of under classmen so in that sense you don’t need to prove your position here to get a role or position, you can get involved right away.”

Kosiak’s role as choreographer and her work with the show was a key factor in bringing the scenes together. The movements in the show and the thoughtful transitions kept the attention of the audience in a way that, sometimes, blocking doesn’t do.

“Although it’s not a very long piece it is a very complicated piece,” explained David Miller, director of the show. “There are a lot of moving parts and of course I am very proud of [the cast],”  Miller is a librarian in Curry’s Levin library but is heavily involved with Curry Theatre.

Overall this was a great show and if you didn’t see it then you really missed out. After seeing this performance I look forward for what next semester’s shows have in store for us, including the main stage production of “Green Day’s American Idiot” in December.

Family Jewels, directed by Professor David Miller, was the first play performed and was a brilliant way to begin the night. Family Jewels is a short play about a recent widow, confronted by her brother-in-law about a family heirloom, a diamond pendant. He was looking for proof that the woman, driven mad due to the fact that she was barren, killed her husband and mutilated him. The play culminated in a fight that ended with the widow admitting to killing her husband and getting knocked-out, and her brother-in-law finding his proof going through a chest and finding the silver pendant as well as the other family jewels.

This play included wonderful acting by the cast; the combat scene toward the end was brilliantly executed in spite of the difficult stage set up. This play was written well and was a very interesting scene to see unfold in front of you.

The second play was Happy Birthday, Baby Girl, a heartwarming story about a foster family and directed by Professor John Barrett. The story was based around a baby’s birthday. Two of the host family siblings are setting up for their foster sister’s birthday when their other sister walks in and gets angry, because the baby isn’t their actual sister so why should they do all this for her. This leads their adopted sister to get upset and almost cry. As the play progresses the sister who was angry comes to a realization that it’s not a bad thing to do and they continue setting up.

As much as this play was very sweet at the end, the whole time it felt like some of the characters were overreacting. But it was very well written otherwise. It had a nice resolution and ending, and was overall an enjoyable piece to watch. I personally just felt a disconnect. However, I could understand people who actually went through similar situations really enjoying this piece.

Lunch Date, also directed by Miller, was a simple and hilarious play about three friends arguing where to have lunch. Throughout the play they go through countless arguments and try, in many different ways, to decide where to go. They eventually decide to call one of their friends and have her decide, but when they can’t reach her they move on and just continue arguing. At the end of the play it is revealed that their friend has been struck by a bus and killed, on her way to lunch.

This play included hilarious dialogue between the characters and was made better by this great sense of friendship. Everyone could instantly relate and become wrapped up in the story. It felt like a real-life argument between friends; many times I have had this type of argument with my friends. My arguments haven’t, however, ever ended in such bad news.

The final play of the night, and the longest, was Vincent’s Fables, directed by Barrett. This play was about five siblings who are reunited to celebrate their parent’s anniversary. Four of them are chatting and talking about how great their lives are while leaving out and, for the most part, ignoring their middle brother, Vincent. When they do mention him it is in a negative way and it makes him feel awful and angry. Vincent finally snaps and yells at his siblings for making him feel this way. In the second half of the play Vincent somehow finds himself in a support group, run by the god, Pan. The support group includes Vincent, Hades (god of the underworld), Lilith (a succubus), Sir Lancelot (knight of the round table), and Cleopatra (pharaoh of Egypt). Vincent slowly realizes that each of the others in the support group represent his siblings and that they all have problems of their own to deal with, but they all pretend not to.

I would love to see this piece expanded upon. I could see it being much longer; maybe even being a full play. However, I wished there was more of a resolution. We see the setup at Vincent’s family gathering, and we see him figure out that everyone else has issues too; but we never see him go back to his family gathering.  It would have been nice for the audience to be able to see how he treats his family differently after his revelations at the support group. Does he treat them differently? Does he figure out how to communicate better with them now that he knows they’re not perfect? I feel as though there could be a lot more to the story that the audience just wasn’t given.