In 1972, there were no women’s sports teams at Curry College. None. Zero. Zip. Today, the school features seven different women’s team, the same number as men’s squads.

But 40 years after the passage of federal legislation requiring equal opportunities for female students, Curry is still lagging in some important ways.

Since the passage of Title IX legislation in 1972, Curry has made great advancements in providing its female students with equal opportunities in women’s athletics. The college added its first women’s sports team in 1974 (women’s basketball), with softball coming on in 1975. Twenty years after Title IX, Curry had a total of four women’s sports teams, as compared to seven men’s squads. This academic year, the college features a total of 14 teams, split evenly between gender. 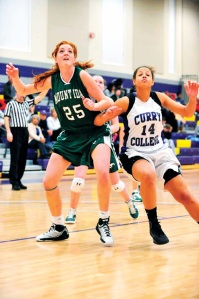 Junior Julia Scrubb is one of 14 players on the woman's basketball team at Curry. // PHOTO COURTESY OF CURRY ATHLETICS

However, Curry features 115 female athletes, as compared to 233 male athletes, according to the college’s 2011-2012 sports rosters. Given that females represent 53 percent of the college’s student body, yet only 33 percent of the college’s athletes are female, Curry is far from compliant with the initial spirit of the law. Athletic Director Vinny Eruzione acknowledges the issue, but he’s also quick to point out that Curry “is in compliance with certain aspects of the three-prong test, such as steadily increasing opportunities for women.”

In 1979, the U.S. Department of Health, Education and Welfare created a three-part compliance test. According to the policy interpretation, the first part of the test requires schools to demonstrate that the percentage of its female athletes is nearly the same as the percentage of its female undergraduate students. The second part of the test requires institutions to show that they are steadily increasing opportunities for women. The third part requires institutions to prove that they are meeting the athletic interests and abilities of its female students. A school is in compliance with the law if it meets any one of these criteria.

While Curry is failing miserably on the first prong, it is satisfying the second and third. For example, the college added a women’s lacrosse team in 2001 and a women’s volleyball team in 2010, and Eruzione said students are regularly surveyed about their athletic interests. “The college also incorporates a questionnaire for incoming students to see what sports people want to add,” said Eruzione. The feedback has led to the creation of several women’s and men’s sports teams, he added.

Curry is hardly alone in its first-prong challenges. According to a 2011 article in The New York Times, the University of South Florida, Cornell University, Duke University and Texas A&M, among many others, routinely massage their roster numbers to make it appear that female students represent a higher percentage of its athletic departments than they truly do. Curry doesn’t try the kind of “slight of hand” that the Times article reported on. Duke, for instance, counts men who practice with its women’s basketball team as female athletes. But the college also has tried to constrain the number of roster spots on men’s squads.

“Roster size doesn’t matter,” she said. “There is no set number of roster spots on my team because women’s lacrosse is a completely different game than men’s lacrosse.”

To Tyla Miller, a sophomore on the Curry volleyball team, equal opportunity includes equal resources. “Our volleyball team receives little to no apparel while other teams get to wear a variety of athletic wear,” she says.

But according to Fran Elms, the women’s basketball coach at Curry, the larger issue worth considering is gender equality throughout society and the way society values women.

“Title IX has done as much as it can in the spirit of the law, but it’s up to us as a society to better appreciate and understand women’s sports as a whole,” said Elms. “The fact that there are no professional women’s hockey teams, volleyball teams or softball teams is because no one wants to risk their dollars. The reason for this is because men draw a lot more attention, money and notoriety historically.”