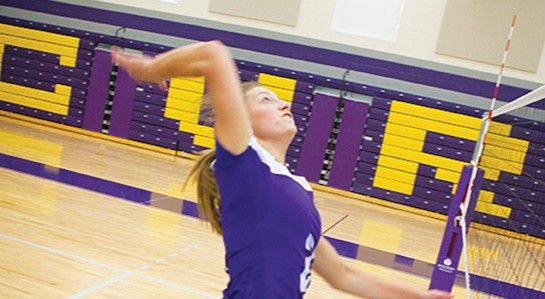 In the game of volleyball, height can make a huge difference. Considering that the net is more than seven feet high, it is fair to say that the taller a player is, the better chance he or she has to dominate a game.

Just don’t tell that to sophomore Courtney DiBiasio, who led the Curry women’s volleyball team in most statistical categories this season, despite her 5-foot, 1-inch frame.

A native of Coventry, R.I., DiBiasio is the shortest player on the Colonels’ roster. Yet, her ability to stay low to the ground, combined with a freakishly high vertical leap—measured at 33 inches—means DiBiasio can do far more than the average Division III women’s volleyball player.

Curry assistant coach Britta Ashman describes DiBiasio’s vertical jump as “unbelievable,” which enables her to “really kill the ball.” She also says DiBiasio’s versatility on the court serves as motivation to her teammates.

“She’s such a dynamic player that we could probably put her in any position and she would succeed at that,” Ashman says. “That’s something this team definitely needs; they definitely look to her for that role.”

Curry finished the season just 7-17, including a 0-8 conference record. The team got off to a great start, winning six of its first seven matches—including victories over Anna Maria (Paxton, Mass.) and the University of Southern Maine—but then dropped nine of its 10 next matches. DiBiasio finished the year with a team-best 140 kills and 25 service aces.

Her exceptional volleyball play is not her only interest, however. Off the court, DiBiasio has a knack for painting and is more focused than ever on her schoolwork, she says. The communication major with a minor in graphic design recently decided to pursue a career in advertising.

“I’m trying to strive for getting on the Dean’s List this semester. That’s my goal,” she says.

Although DiBiasio describes herself as a “social butterfly,” she says she also enjoys finding time for herself. These dual elements of her personality have contributed greatly to her success on the volleyball court, according to Ashman.

“She is a very fiery kind of person, which I think largely attributes to why she is so dynamic in her position,” says the coach. “You could put her anywhere, [but] I think if she didn’t have such a fiery personality, we wouldn’t be able to do that.”

Adds DiBiasio: “I like to try new experiences. I’m a big risk-taker. I’m fearless in a way.”

One such example is how she came to volleyball in the first place. Having never played before high school—she grew up competing in gymnastics—her parents prompted her to try out for the junior varsity girls’ volleyball team. It was love at first spike. She made the team, quickly advanced to the varsity squad, went on to also play club volleyball, and was even named to the All-State team her senior season.

Her risk-taking persona was also evident in her decision to attend Curry, which launched its women’s volleyball program in 2010. In her first season, last fall, the team finished 4-19. It was a marginal improvement from the 2-15 record of a year earlier, the program’s inaugural season.

DiBiasio says the team’s goal entering this past season was to simply win more games than last year. In that regard, the Colonels have been quite successful. On a personal level, she says she hopes to finish her career at Curry with 800 kills—an impressive feat by any standard, let alone for someone just 5-foot-1.

“When I step onto the volleyball court, it’s a whole new world,” she says. “The court is the one place I’ve always felt the most confident in my life because I know that I excel and put my heart into every play.”