Bumps in the Road

A recent change to the campus has left some students and staff with mixed feelings, and sore shocks. 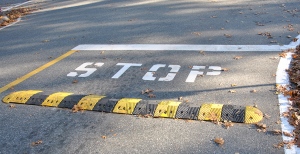 Four new speed bumps have been added to the intersection of Atherton Street and Blue Jay Way. // COURTESY PHOTO //

Four new speed bumps were added to the intersection of Atherton Street and Blue Jay Way, which already features four stop signs. Public Safety Chief Brian Greeley said the speed bumps were added because of “heavy pedestrian traffic at the four-way,” but acknowledged that there haven’t previously been any pedestrian accidents at the intersection. The college sought to be proactive rather than wait for someone to actually get injured or worse, Greeley explained.

He said some students are texting while driving and that cars routinely don’t come to a complete stop at the intersection. Massachusetts banned texting while driving in 2010, and the law covers emailing, Internet searching and other non-phone call-making activities with mobile phones and laptops. Violators can be fined $100.

Despite the possible benefits to the safety of everyone on campus, a number of students
are unhappy about the new driving conditions.

“The amount of speed bumps on campus are unnecessary and they should be flatter,” said freshman graphic design major Anthony Hinds.

A Cavalier shuttle driver, who asked not to be named out of fear for his job, said he despised the new speed bumps. “There are way too many speed bumps on campus,” he said. “The [new] ones installed at the bottom of the hill are the worst.”

Of course, there are plenty of walkers on campus who are thankful.

“They are fine and are in the right locations,” said junior sociology major Dana Bartie, who noted that people on campus still drive a little fast for comfort. “It has definitely made traffic safer for pedestrians, especially at the four-way.”