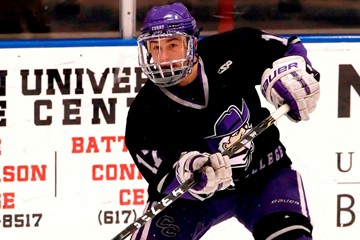 After falling behind early in the first period, Curry battled back to tie conference rival Salve Regina, 4-4, in Portsmouth, R.I., on Wednesday night. Senior Casey Brugman led the way with two goals.

With two points on the line in ECAC Northeast conference standings, Curry fell behind early as Salve freshman Zakerie Thompson scored just 2:08 into the first period. The puck was originally shot wide past Curry goalie Derek Mohney, but it rebounded off the boards and bounced back to the front of the net. There, Salve junior Chase Davis collected it and passed it to Thompson for the 1-0 lead.

Eight minutes later, with 9:31 left in the first, Salve senior Anthony Birbilis scored to make it 2-0.

Throughout the first period, Salve controlled most of the play and kept Curry to just 6 shots on goal.

“Our sense of urgency just wasn’t there, as has been the case periodically throughout the year,” said Curry first-year head coach TJ Manastersky.

The Colonels’ lack of energy continued through the first half of the second period, as Salve killed two Curry power plays. However, the third time would be the charm. At 9:03 into the second period, Curry scored on a power play as freshman Frankie Posillico (2 goals, 5 assists) fed a pass to classmate Patrick LeBeau (4 goals, 2 assists), who scored to cut the lead to 2-1. Salve answered less than a minute later when freshman Alec Butler scored a shorthanded goal.

Curry answered back three minutes later, at 13:21 of the 2nd period, with Brugman (7 goals, 9 assists) scoring.

Salve answered Brugman’s first goal in swift fashion, as freshman Marc Biggs scored to make it 4-2. But Brugman wouldn’t let the Colonels quit; he scored his second goal at the 11:42 mark of the 3rd to bring the Colonels to within one. A little more than a minute later, Curry freshman Shane Harrington (1 goal, 4 assists) received a pass from freshman Nicholas Cappola (2 goals, 3 assists) and scored to tie the game, 4-4.

The game remained tied through overtime, and Curry came away with an important point in conference standings to stay in 3rd place at 5-3-3 (9-10-3 overall). “We stuck with our game, we fought back and found a way to come out with an important conference point,” said Manastersky.

Dawson is a goalie on the Curry men’s hockey team and sat out Thursday’s game due to injury.