There is no denying that Curry doesn’t have the best or biggest music scene. Rarely, if ever, do artists play on campus, and the school’s music department is not exactly comprehensive.

However, there is one organization on campus that is committed to providing quality music and programming to the student body: WMLN-FM, Curry’s student-run radio station at 91.5 FM. 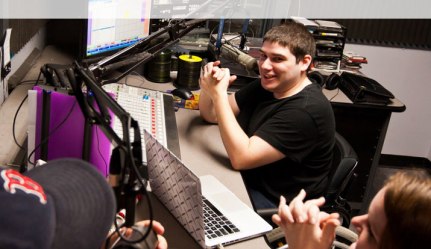 Currently in its 37th year of operation, WMLN broadcasts 20 hours a day, from 6 a.m. to 2 a.m., and features shows from a variety of genres. In the morning, you’ll hear oldies and classic rock. Top-40 music runs throughout most of the afternoon, followed by alternative rock. In the evening, country is played from 7-9, followed by dance music and the metal show, which closes out the day’s programming.

The station has a broadcasting radius of about 40 miles and can be heard online.

Despite students’ hard work in making WMLN the diverse and distinct station it is, 91.5 is largely ignored and overlooked on campus. While it is sometimes streamed over the speakers at the Student Center, more often than not WMLN is turned off and the Student Center plays its own playlist.

I have heard complaints from various students that Student Center staffers don’t tune in because they never know what’s playing. It’s a fair assertion; WMLN, a non-commercial station, tries to cover many formats and genres.

The station also has a Sports Department, which broadcasts commentary of many Curry athletic events. This probably leads to further confusion to potential listeners who tune in expecting to hear music.

With all this in mind, here is the general schedule for WMLN on a typical day. There are several specialty shows throughout the week, often in the evening, that don’t always stick to the original format.

Kevin Diffily is a Coordinator for WMLN’s Music Department, as well as the student editor of CurrierTimes.net.