Curry competed in both the flat and jumping competitions. Flat is a class that is based on ground riding in which five to seven riders are asked by the judge to perform certain tasks and make their horses move in certain ways. Riders are judged on their equitation, which is essentially their ability to control the horse and follow the course. Jumping, or over-the-fences, involves riding the horse over obstacles on a course.

Team captain Alyssa Konstantino, a sophomore who placed fourth in flat and fifth in jumping, said the entire team was thrilled and proud of their performance. 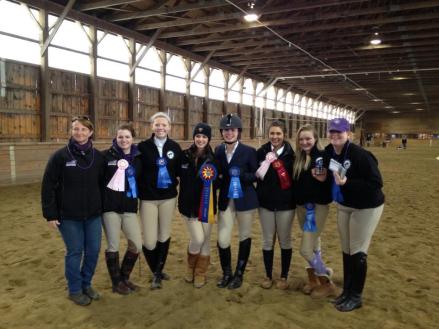 “Finishing in first was something we have been wanting for so long,” she said. “The team has been working so hard and we knew if we tried out best, worked together as a team and supported each other, anything was possible.”

Betsy Kupic coaches the team, which is a club rather than a varsity sport at Curry.

Co-captain Katelyn O’Toole, who placed first in jumping and is the only senior on the squad, praised her teammates’ effort.

“Equestrian is a very individual sport and the team has really done a good job of breaking that and becoming more of a family,” she said. “[We work] together at team competitions and [cheer] each other on.”

DeBenedictis said the experience has been surreal.

“I am so incredibly proud of our team. We still can’t even believe that this is real life,” she said. “We love and support each other and I could not ask for better teammates, friends, and coach.”

All three girls praised Kupic’s role in developing the team and leading it to its first blue ribbon.

Curry is a relatively new and young program, competing in just its fourth season. The team consists of one senior, three sophomores, and six freshmen riders. It competes against bigger schools in the area, such as Boston University and Tufts University.

Curry will host a show on Saturday, March 16 at Holloway Brook Farm in Lakeville.

DeBenedictis said that while Curry’s team is cherishing the moment, it is hungry for more.

“We are so honored to have a ribbon at Curry now,” she said. “We can’t wait to get out there and bring home some more blue ribbons in our last few shows of the season.”