The hope of an undefeated season remains alive and well for the Curry Men’s Soccer team after a 3-0 victory against Newbury College on Monday Sept. 21, 2015.

The Curry Colonels are off to one of their best regular seasons in school history.

Head Coach Peter Mendel has led the team to an overall record of 8-0, and the team is currently tied for first place in the Commonwealth Coast Conference, with a 2-0 conference record.

After a slow first half from both teams, the Colonels came out much more aggressive in the second half. 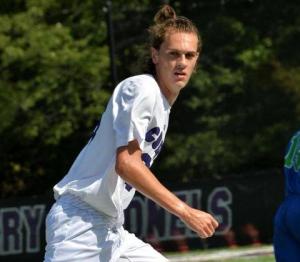 Senior defender Ryan Madden said, “We possessed the ball much better in the attacking half and took a lot of pressure off our defense.  We were stronger and more physical and wore them down; they didn’t have too many chances late in the game.”

Three minutes into the second half, senior forward Matt Cotnoir was pulled down inside the 18-yard-box by Nighthawks freshman defender Mario Herrera, drawing a penalty.

Senior midfielder Rolando Montero drove the penalty kick past the keeper to make it a 1-0 lead. “Once we drew the penalty we had the momentum,” said Montero.

The Colonels looked like a different team after the penalty kick was netted. They moved the ball around quicker, and the team seemed to click on the offensive end.

Senior midfielder Richkaard Verrier was effectively attacking the left side of the field and he put constant pressure on the Newbury defense.

Curry didn’t take a corner kick in the first half, but capitalized on one of four attempts in the second half.

Cotnoir sent a high-sailing ball into the box, and sophomore defender Giancarlo Orsini rose up and redirected the ball into the net for Curry’s second goal. The goal was recorded in the 61st minute.

Stein was in on goal, with only the keeper to beat. As the keeper came out, Stein finessed the ball around the keeper and scored Curry’s third and final goal.

Newbury College fell to 4-5 on the season after allowing three second-half goals to Curry.

Newbury will next play Eastern Nazarene College on Wednesday Sept. 23, while Curry will travel to Johnson and Wales University on Tuesday Sept. 22.

Second-half surge: Curry had only six shots in the first half, but more than doubled that number with 17 in the second half.

All-Conference Aspirations?: Johnson leads the Commonwealth Coast Conference with a save percentage of .915. He has only allowed four goals this season.