On March 8 the Student Government Association meeting was adjourned prematurely due to too few members present as all female members of SGA were absent in honor of International Women’s Day.

The lack of SGA members in attendance resulted in a lack of productivity. On the agenda for the day were campus break-ins, the schools response to these break-ins, and budgets for clubs and events.

The meeting was put to a swift close after reality set in that without their female constituents the student government association would be not be able to perform any sort of meaningful action; SGA has 21 female members and 13 male members.

Sophomore Class President Greg Estes who was present for the meeting and passionate about dealing with the campus burglaries was disappointed about the mass absence.

“I really wish would could have had the meeting,” said Estes. “I really wanted to talk about the break-ins.” 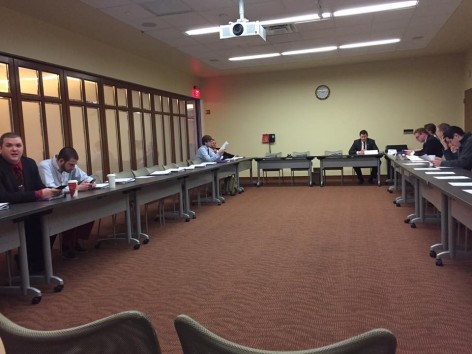 The part of International Women’s Day that prompted this action was an initiative called A Day Without A Woman which proposed that women take the day off from work, avoid their regular duties, and wear red to show solidarity. This was all done to raise awareness that women are essential; specifically in the work place, highlighting the wage gap that currently exists between men and women.

One member of SGA who chose not to attend the meeting was Senior Class Representative Abby Pieger. She clarified that it was not the intention to prevent things from getting done but rather show that women are vital to the workplace.

“I just firmly believe in equality of genders, sexes, sexuality and race,” explained Pieger. “I think that everybody observes equal opportunity.”

Student Body President Zoe Stuade found the experience to be both vital and eye opening for both SGA members and the Curry Community.

“Being a member of SGA means spreading the voice of the Student Body. We need to stand tall and show our peers what we believe in.” Staude continued, “With SGA having mostly female members, we thought it was important to demonstrate the message that without us, not only SGA but the rest of the college would have a different atmosphere to it. We are simply empowering our female student population in hopes that we will be making a positive impact on our community.”

Now three weeks later, Staude believes the protest had significant impact on the SGA environment saying she feels as though Student Government “does have a different atmosphere than before our protests for International Women’s Day.”

While it may have prevented the SGA from getting its job done that March day, it would appear that there was real change taking place because of the action of these women. There’s no doubting that these women were essential to a day of productivity.