Safety With a Smile

Officer Kaylyn Gooley typically works the tough 3 p.m. to 11 p.m. shift at Curry College. On occasion, she also gets saddled with the midnight shift, which gets her home long after the sun has risen.

Gooley is one of only three female Public Safety officers at the college, and, at age 24, the youngest officer on staff. Yet, according to Gooley, she’s living the dream.

“I love my job; it’s so great,” she says, smiling and leaning back in a chair at her desk in the Public Safety trailer.

Currently in her second year on the job, Gooley says the hardest part of working in the “real world” is finding personal time. So, she works to create bits of normalcy around a schedule that is anything but. For example, Gooley makes it a priority to eat breakfast almost every day with her boyfriend, who she met during her senior year at Westfield State University. 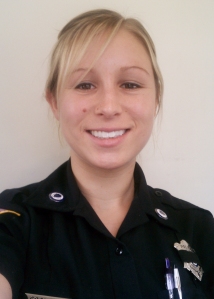 Though she typically works evening shifts, Officer Gooley finds it beneficial to bring a sunny approach to her job. // COURTESY PHOTO

On the job, life is actually relatively simple and often enjoyable, she says. Gooley frequently jams out to her favorite pop songs while on routine patrols in her Public Safety cruiser. And, oddly enough, she says transporting sick students is one of the best parts of her job.

“I love meeting new people,” says Gooley, explaining that this usually happens only when she is bringing them to Milton Hospital or giving students rides in the rain.

An only child, Gooley was born, raised and still resides in Norton, Mass., just south of Milton. Much of her family still lives in the area, too. (Gooley says a typical Christmas dinner at her house involves 40 people.) She developed her work ethic from her parents. Gooley’s mother used to run a beauty salon and would often have Kaylyn sweep the floors after school. “Sometimes, they had me give buzz cuts to the older men,” she adds with excitement.

Gooley’s salon days were numbered, though. As soon as she was old enough to have a real job, she jumped at the chance. “My first job ever was in Dunkin’ Donuts,” she says. “Waking up early to go in, even if people were grumpy with me, it didn’t matter. I was like, ‘Here’s your coffee, because I know after you drink this delicious coffee you’re going to have a better day!’ ”

In college, Gooley only knew that she wanted to work with people. Eventually, it was a ride-along with a local police officer—and several police-related internships thereafter, including one where she helped train bomb-sniffing dogs at Logan Airport—that convinced her to pursue criminal justice.

“I like working with the community, doing good and helping out…so I found out that anything in the law enforcement field would be something I’d be interested in,” she says.

Upon graduating from Westfield in 2009, Gooley landed her current job as a Public Safety officer at Curry. She calls Chief Brian Greeley “the coolest” person on campus—next to President Ken Quigley, she clarified—and says her relative youth has been an asset. She understands why students do many of the things they do, whether it’s to blow off steam or to simply have a good time. Either way, Gooley says she wants to “make sure they are safe and of age.”

“She comes to work every day with a smile and is friendly, but direct when she needs to be,” says Greeley. “She’s a great role model for students and other officers.”

Gooley says she is still learning the ropes of her new job and getting used to life after college. But one thing she won’t likely change is her approach to people. After all, she got into this business for a reason.

“My whole life people have always told me, ‘Oh, you’re too nice, you’re too positive,’ and I just laugh,” says Gooley. At times, “you have to be stern. I can be mean. But I would rather not and see where that takes me.”