In just a few short weeks, this year’s graduates will cross a stage and receive a piece of paper that they have worked for since freshman year. Vernelle Smalls-Cardona will be among this year’s graduating class, and the accomplishment is no small feat.

“To me, life is complete,” says the 46-year-old continuing education student, a communication major and criminal justice minor. “There are three big things I decided I wanted out of life: a nice house, a good husband, and a bachelor’s degree.

“I spent a lot of time pushing education and really not practicing what I was preaching. Now I can, because I have hands-on experience.” 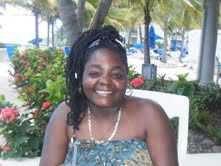 With a degree soon in hand, Vernelle Smalls-Cardonasays she hopes to serve as inspiration for her many nieces and nephews. // COURTESY PHOTO

The 28-year-long journey from her high school graduation to a college degree has been far from simple. Growing up in the outskirts of Boston, Smalls-Cardona took on the caretaker roll within her family. The second oldest of 10 brothers and sisters, she spent much of her youth helping her mother raise the many kids in her family.

“I don’t want children of my own, never have,” she says. “I grew up with babies all around me!”

She acquired her first job at the age of 13 and has since been self-sufficient. When asked where her drive comes from, she’s quick to give credit to her parents. Her mother, Ernelle Smalls, was a stay-at-home mom who devoted her life to raising her children. Smalls-Cardona’s father, Tommie Smalls, has held the same job for 40 years as a sheet metal worker. Neither parent graduated from high school, she says.

Smalls-Cardona says her life experiences—both good and bad—have helped shape the person she is today. In the late 1960s and early 70s, she witnessed violence as a result of school desegregation and federally required “bussing” of students in the Boston school system. And in July 2010, her brother Anthony—a married father of nine—was shot and killed in Mattapan just a half-mile from his home.

It was the presence of crime throughout her community that sparked Smalls-Cardona’s interest in criminal justice. For the last 12 years, she has worked for the Boston Police Department’s Domestic Violence Unit (DVU). She is currently the head secretary in the administration office and assigns cases to detectives, as well as acts as a liaison with DVU and other district supervisors and clerks.

“If I had one word to describe Vernelle Smalls-Cardona, it would be ‘effervescent,’ says Renee Payne-Callender, who works with Smalls-Cardona in the Boston Police Department. “Regardless to what is going on around Vernelle, negative or positive, she is always full of love, life and sunshine.”

With graduation on the horizon, Smalls-Cardona says she’s looking forward to taking some time off to travel with her husband, Eddy Cardona.

“I want to spin the globe, touch somewhere and go,” she says.

No matter where she lands, Smalls-Cardona will return to the Boston area with hopes of inspiring the next generation.

“I want to talk the talk, and walk the walk,” she says.