If you walk in the door of the Chipotle on 250 Granite St., in Braintree, chances are you’ll eventually walk out with a satisfying “full” feeling. For college students short on cash, it’s well worth the walk.

Obviously, Chipotle Mexican Grill is one of the most popular food chains in America. Is it a traditional Mexican restaurant that gives you an excellent family experience? No. But it always seems to have food that’s simply tasty and fresh. It’s the taste of something made in a kitchen, not some far-away factory. 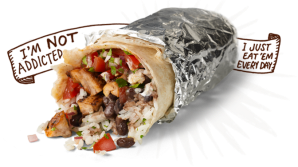 You’ll also get the fast-food aspect of things. Anything you order is served quickly and at an affordable price, usually less than $7 without any extra toppings such as guacamole. Although the company announced in October that it would increase its prices next year, the hikes won’t be so high that dining at the “Grill” becomes cost prohibitive.

Another of the pro’s of Chipotle is that you can put whatever you want on your burrito, which comes in either a tortilla or in a bowl. The restaurant also offers tacos and salads (basically, a burrito on top of lettuce). Choose from chicken, steak, pork, or straight veggies. And for the health-minded, there’s also a choice between brown rice and white. From there, build away until your heart is content.

An average burrito usually weighs about a third of a pound, which means you’re getting a good bang for your buck. Some people have argued that you actually get more food when ordering the burrito bowl.

So, find a friend with a car or simply ask the Student Center help desk for details about the next shuttle heading toward the South Shore Plaza. It’s well worth the ride!