‘They Just Call Me Vine Girl’

We live in a world dominated by social media. Whether it’s through YouTube, Facebook, Twitter, LinkedIn or some other digital platform, everyone can share his or her thoughts and observations for others to consume.

But most people reach only a relatively small number of “consumers.” Curry freshman Gabrielle Pearl is not “most people.” 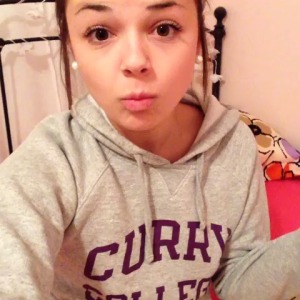 Pearl, a psychology major, is something of an online celebrity thanks to her work with the Twitter video platform Vine, which allows users to create and post six-second videos from their mobile devices. To date, she has nearly 150,000 followers, making her what the company calls “Vine Famous.” According to Vine, anymore with more than 10,000 followers, is awarded the moniker.

Pearl’s videos are largely humor-based, with some salty language often thrown in. She talks about Boston-area topics, like the Bruins and Dunkin Donuts, but also shares her thoughts about everything from college-girl behavior to everyday human behavior. What makes Pearl’s Vines particularly unique is her use of movie or TV video clips edited in.

According to Pearl, the key to captivating an audience is not making something that you might think is funny. Rather, it’s in making a Vine that everyone will think is funny. Her most famous Vine is titled “Normal 18 Year Old…and Me.” It’s a six-second commentary on…well, it’s not entirely clear. Nonetheless, the video has been viewed nearly 3 million times!

“I would see girls make Vines about partying, and I would just be sitting at home watching SpongeBob,” said Pearl.

After her “18 Year Old” video, Pearl said she saw her followers rise from the hundreds to more than a hundred thousand. When asked what her friends and family thought about her online stardom, Pearl explained: “They all thought it was funny because it’s how I act all the time.”

Pearl said most students on campus don’t know who she is, in part because she’s new to Curry as a freshman. However, many students do know her from the web.

“They just call me Vine girl.”