For 19 of my 20 years, I have lived in various neighborhoods of Boston. Experience teaches what guidebooks cannot, so I hope to educate those new to the area a thing or two—or maybe even three—about the wonders of Beantown.

Getting Around
Boston is a confusing place. At the Museum of Science, there’s an exhibit featuring a pendulum swinging around and making random lines in a pile of sand; this is actually our urban planner.

In order to walk around downtown and not feel like you’re in the “Blair Witch Project,” learn the city in terms of MBTA stations. From Curry, get to the Mattapan station on the Red Line. (Use the T-Van shuttle from campus.) From there, it’s 15 stops to Downtown Crossing. 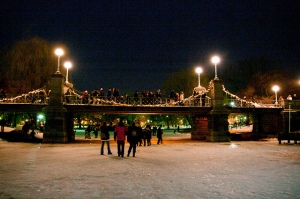 Keep in mind, most stations are strategically/serendipitously located near just about every place you might want/need to go. So ride the rails. Transfer to the Green Line and check out the glam of Newbury Street (Copley stop). Or transfer to the Orange Line and grab a great Italian meal in the North End (North Station). For $2.10 a ride, it’s a great way to get around and see the city. There’s even a free app to navigate the MBTA system.

Entertainment
Staying amused is pretty easy in Boston. The Boston Common is an endless source of entertainment; someone is always doing something weird there. I was once walking around the Common with some friends from Emerson and we ran into two guys dressed as Winnie the Pooh and Tigger rocking out to Gangnam Style. They gave us all hugs, which was both creepy and kind of nice.

The trick is to stay open and receptive to stuff like that. Embrace the freaky (sometimes literally), and you’ll find yourself stumbling into all kinds of adventures.

For anybody with a magical disposition, Emerson College’s Quidditch team (see Potter, Harry) practices and plays its matches on the Common. Emerson students also put on public plays and other street performances. You’ll often see Suffolk University law and business students walk past and shake their heads at such frivolity. Don’t be like that.

This is your city now, so live it up while you can.

Tagged as: boston, Boston Common, getting around, mbta