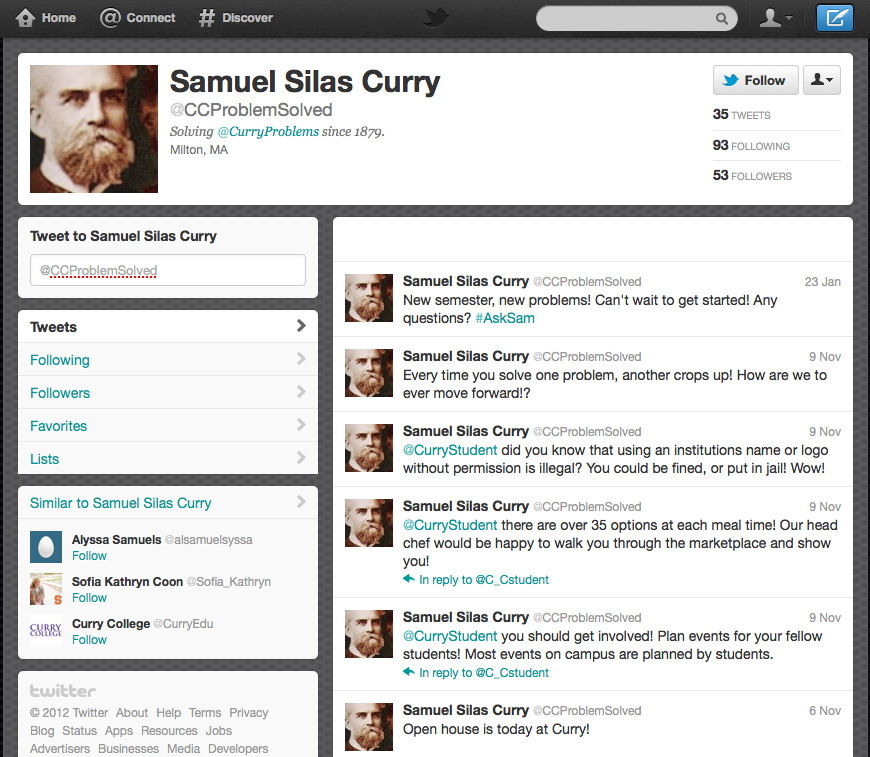 Most college students feel comfortable expressing their opinions online. They also like to complain.

By combining the two, a number of Curry students have found a collective home on Twitter for their many objections about life on campus.

“One day, I saw that a bunch of my friends from Suffolk, UMass, Salem State, etc. re-tweeting from ‘SuffolkGrlProblems,’ ‘UMAProblems,’ ‘SSUProblems’ accounts and I thought it would be funny to create one for Curry,” said a senior female Curry student who asked not to be identified out of fear of retribution by the college’s administration. “I didn’t tell anyone that I was going to create the account, and the jokes just started flowing.” 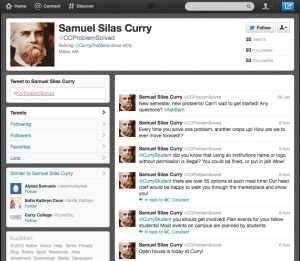 The first of the many tweets on @CCProblems were, “Girls go to dinner in packs, that’s the rules. #Curryproblems” and “He bought me a pitcher at McGraths. #Romantic #Curryproblems.” Within two days, word spread among the student body and @CCProblems had more than 350 followers. That’s when the tone of the page took a turn.

Curry students began actively voicing their complaints on the page, criticizing boring professors, obnoxious girls, and the food at the Student Center, among other topics. It quickly became something of a safe space for students to vent.

“As a paying student at this school, I should be given the opportunity to complain about certain aspects of Curry that I encounter,” said the page’s creator. One of her more pointed tweets read: “When you walk into your common room and the cleaning crew is sitting on your couch watching tv instead of vacuuming. #CurryProblems.”

A few days after @CCProblems was created, an account titled @CCProblemSolved appeared on Twitter. @CCProblemSolved began responding to the various complaints posted to the @CCProblems page, offering potential “solutions.” One post read: “Curry College has an outstanding community, and our growth has been tremendous. Part of growing is seeking improvement, and solving problems.” In addition, the administrator of the page criticized the founder of @CCProblems for enabling the complaints of others, and even suggested that the administrator committed a crime by using the college’s logo without permission as her profile picture. @CCProblemSolved features a photograph of Samuel Silas Curry, the college’s founder.

“Students should be able to vent about certain issues at Curry,” said Bordeleau, noting she believes a Curry-loving student likely created the account. “The way it was done (through @CCProblems), was in a passive way and wasn’t effective. There are better forms to solve a problem. The problems should be brought to the right people to address the issue….The faculty and staff of Curry want to help.”

But according to some students, @CCProblems was a great way to express their opinions about the college, often in a comical fashion.

“The school should listen to some problems because some were true, but some were also just funny,” said Kayla Urquhart, a sophomore communication major.

Added Neila Rene’, a freshman nursing major, “A lot of what was said on @CCProblems is true and funny. Maybe the deans should listen to what the students are saying so there would be less ‘Curry Problems.’ ”

The account still lives on in Twitter, with the Curry logo replaced by a cat in a spacesuit, “the most random picture I could find…to show it was supposed to be a joke,” said the creator.

Joke or not, the page has inspired imitators. Today, there are various Curry-related “problem” accounts on Twitter. One is called @CCollegProblems, and Curry students tweet more frequently there—it has nearly 230 followers—than on the original “problem” account. Another is @CurryGirlProbz, which has more than 100 followers. There is also a hashtag trend page, #Curryproblems. Trend pages are not administered by anyone, but instead serve as a central location for anyone tweeting about a specific topic, so long as they include the hashtag name. Some recent examples include: “No power in the state house basement… Great start to Monday… #curryproblems #mondayproblems #wtf” and “When your bagel in kennedy tastes old… #curryproblems.”