More than two-dozen Curry students will be traveling halfway across the globe this summer, but it won’t all be fun and leisure.

For the past eight years, students from the college’s nursing and math programs have traveled to China to study abroad. This summer will mark Curry’s fourth trip to the world’s most populous nation.

The biennial trip runs for about two weeks and begins on May 21. The goal, according to the professors involved, is for students to experience a new culture and to examine another nation’s healthcare system. The group makes visits to hospitals and military universities around the Beijing area. 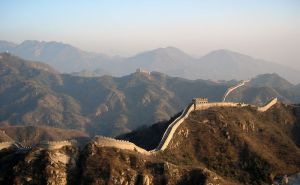 The Great Wall Of China // PHOTO BY BJOERN KRIEWALD

“I love it,” said Professor Susan LaRocco of the Nursing Department. This will be her second time going on Curry’s China trip. “It’s a nice opportunity to work closely with students in a more casual setting.”

As of press time, 26 students have signed up for the trip. The question is why.

“I hope to understand more about the Chinese culture and how patients are treated and cared for so I can bring that back here,” said Caitlin O’Neil, a junior nursing major who is registered for this summer’s trip. “I’m really excited to do all the touristy things and see all the sights because you always hear about places like the Great Wall of China on the news and in textbooks, but we’ll be able to see everything firsthand.”

The number of Americans studying in China has grown 30 percent annually from 2001-2007, according to the U.S. State Department. Still, 10 times more Chinese students come to the United States for educational opportunities than American students go to China.

Hilary Labonte, a senior nursing major, traveled to China when the trip was offered in 2010. She said she has no regrets whatsoever. “I loved the whole trip!” said Labonte. “The experience was something I never thought I would have.”

One of the cultural differences between the United States and China, she added, was the sheer size of the population over there. “There is no such thing as personal space in China,” said Labonte. “Everyone is always crammed together.”

Labonte said the Chinese and American healthcare systems are more different than they are similar. Although the Chinese use many Western medical practices, they also routinely perform many traditional Eastern treatments, such as acupuncture, hot stones and herbal medicine, she said.

During the trip, nursing students are required to take a course called contemporary topics, taught through Curry. Throughout the course, students are asked to maintain a personal journal of their experiences, thoughts, feelings and impressions.

Math students on the trip are also required to take a course, with Professor Tracy Wang of the Mathematics Department. Wang, a native of Beijing, launched the China trip eight years ago. She said she wanted to provide Curry students with the chance to see another culture, where she came from, and to learn more about China itself.

All students must pay their own travel expenses, which total about $5,300, as well as tuition for the course they take.