A Curry College student has been arrested after a search of his dorm room in Lombard Hall revealed a gun, ammunition and a several types of illegal drugs.

Darius Boodoosingh, 18, was taken into custody by Milton Police late Friday, according to a statement released to the press by Milton Police Deputy Chief John King. Boodoosingh remains in police custody at this time, prior to his arraignment sometime next week. 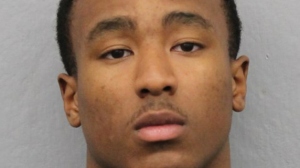 Darius Boodoosingh, 18, was arrested after Public Safety found a firearm in his Lombard dorm room // PHOTO BY MILTON POLICE

An email from Dean Maryellen Kiley informed the Curry community that the student had been placed on interim suspension. The community notification sent out by the college stated that campus security searched a residence hall Friday evening in relation to recent thefts across campus.

At this time, Boodoosingh has not been charged with burglary, larceny, or possession of stolen property.

The Milton Police Department was contacted by Public Safety and Boodoosingh was arrested. The charges against Boodoosingh indicate that he planned to sell the drugs. The charges also confirm that he did not have a license for the gun. It is against state law to possess a gun on campus.

Boodoosingh was a star running back at Boston English High School. He was not listed on the Curry football team’s roster for the 2015 season.

Curry students were taken aback by the presence of a gun on their campus. “I was very surprised,” said sophomore Sam Lyman. “To be truthful, I was a little nervous when I originally saw it.”

Senior Jillian DeSousa echoed Lyman’s thoughts. “I knew there were thefts but I never would have thought a kid could get away with having a gun and ammunition on campus,” she said. “I just wonder how he got it, how he [was able to sneak] it onto the campus. It’s actually really scary.”

DeSousa also added that she was disappointed this had flown under the radar with public safety. In the community notification from Dean Kiley, she noted that the discovery of the weapon by Public Safety was a direct result of information shared by students related to the string of thefts that have been occurring.

“You’d think after the sexual assaults that happened last year [and this semester] that they’d beef up security.” She also said she thought it seemed like they did for a little while but that it didn’t last.

Seniors Dakota Caron and Steven Marino said it was eye-opening that someone could have a gun on campus at Curry. “You see all those stories about it, but on such a small campus you would never think you would have that kind of problem here,” Marino said.

“Granted it’s a small school and everybody knows each other, but I mean Public Safety kind of lets anyone onto campus,” Caron said, in reference to the gate at the school’s entrance. “If you don’t have a sticker they give you a hard time, but it’s sort of like anyone can get onto campus.”

Both Marino and Caron did say that they still felt safe at Curry, but that they would like it a little bit more secure. “I feel like Curry did a good job of maintaining the situation and taking care of it,” Marino said. “But you really have to be alert to your surroundings.”

College officials say they don’t believe there’s any threat to the campus community. In a statement, Director of Communication Fran Jackson stated, “At this time, no immediate or ongoing threat to our community has been deemed present.”

A Curry College student has been arrested after a firearm and ammunition were found in a campus dorm room.

Darius Boodoosingh, 18, was taken into custody by Milton Police late Friday. Dean Maryellen Kiley sent out an email at the time to inform the students he had been placed on interim suspension.

The community notification sent out by the college states campus security searched a residence hall Friday evening in relation to recent thefts across campus. During the search, a gun, ammunition and a variety of drugs were found.

The Milton Police Department was contacted by Public Safety and the student was arrested. According to Milton Police, Boodoosingh had planned to sell the drugs.

According to WFXT-25, Milton Police have confirmed Boodoosingh did not have a license for the gun. It is against campus policy and state law to possess a gun on campus.

College officials say they don’t believe there’s any threat to the campus community.