The Curry College Hockey Team has started the countdown to the second annual Teddy Bear Toss on Saturday, December 5 at 4:30 p.m. The event will be held at the Max Ulin Rink in Milton, Mass. 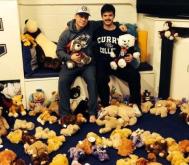 The team’s social media has been taken over by dozens of cuddly, fuzzy teddy bears. Every day a new photo of a player and their bear is posted to their Instagram account. There are also active countdowns to the big day on their Twitter and Facebook pages.

The hockey team has teamed up with TEAM Impact, an immersion program that matches sick children with local college athletic teams to host the Teddy Bear Toss.

When the Colonels score their first goal on Saturday, fans will throw their individual teddy bears onto the ice. The teddy bears are then collected and donated with the help of TEAM Impact to several charities to help children facing life threatening and chronic illness.

“The ability to spread joy during the holiday season is a humbling experience,”said sophomore Business Management major and forward Shane Tracy. “It makes you more appreciative for what you have.” 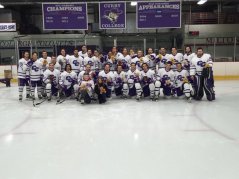 The Colonels are looking to top last year’s donation numbers and donate more than 400 bears this holiday season. Fans have the option to bring their own bears to the game or to purchase bears at the door, while supplies last.

“Personally, I believe this event is significant for everyone involved. From the fans donating teddy bears to Colonels’ players, every individual involved should experience a feeling of contribution to a big cause.” said Fitzgerald.

For more information regarding this event, check out the Curry College Hockey Team’s Facebook, Twitter and Instagram for a countdown to the event along with team updates.