While some college students are enjoying the start of finals, others have given up, relying on thick pillows, the fetal position and memories of better (elementary school) days. Which brings me to 90s nostalgia.

Arguably, the best part of the Internet is the ability to go back in time. Whether you use that power to take harmless note of what your ex-girlfriend did last weekend or to watch Daria re-runs is your choice. Though, here, I’ll be writing about the latter.

It’s important to have a healthy, constant stream of 90s nostalgia on all social media fronts, and the following will help you accomplish that. 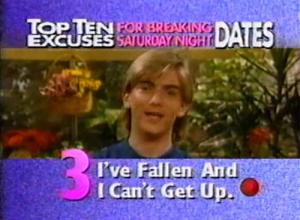 The 90s on Tumblr!
“The 90s Were All That,” a popular Facebook fan page, also has a Tumblr page worth mentioning. But there are a couple others that are better. Imremembering.com is one, but F***yeah1990s.tumblr.com is way better. It provides everything you need to know about the 90s.

The 90s on Facebook!
While Facebook is third—behind Tumblr and Twitter—when it comes to 90s content, it is first in 90’s video. The 90’s Were All That fan page has full-length episodes from popular 90s Nickelodeon shows like “Are You Afraid of the Dark” and “AAHHH! Real Monsters.” The Daria fan page is OK when it comes to video. The team behind the page regularly posts new full-length episodes. If you don’t have time for that, though, check out the Saved By The Bell fan page. It hardly has video, but the amazine quotes are constant.

The 90s on Twitter!
First off, Twitter is awesome because you can keep tabs on all of your idols, such as Melissa Joan Hart (omg) or Pete and Pete (both of them). Sadly, Sarah Michelle Gellar, aka Buffy from “Buffy, The Vampire Slayer,” aka the reason for life circa 1998, does not have an account. Also, besides popular hashtags like #why90srock, Twitter has a couple of great 90s-focused accounts. 90’s Girl Problems is way more popular than 90’s guy and 90’s boy problems, but they are all worth following.

The 90s on You Tube!
Too many, but these two are a good start: