Curry Continues to be Riddled by Biased Incidents﻿

Despite being the target of anonymous hate speech, a Curry College student is refusing to show fear.

A note left on the student’s windshield outside of Bell Hall served as the third campus incident reported within the same day, Tuesday, Sept. 26. Two other students residing in 886 found derogatory remarks about their sexual orientation on their own property.

The following day, Wednesday, Sept. 27, yet another incident was reported, this time attacking the sexual orientation of a member of the college’s radio station, WMLN 91.5.

Vice President of Student Affairs Maryellen Kiley said the college’s Bias Incident Response Team (BIRT) has begun its review process and has also taken steps to aid those affected. The incidents have been referred to Milton Police, who are investigating them as potential hate crimes.

The team has also “engaged with relevant affinity groups and student clubs and organizations that might have impacted members, implemented programs in the 886 Brush Hill residence hall, and discussed ideas about how BIRT can continue to educate the Curry community about the importance of inclusion and embracing our differences.” The myCurry portal displays a “Community Notification of Reported Bias-Related Incidents” sidebar that dominates the right third of the screen as you log in.

Michela Flowers, a sophomore Psychology major, was among those targeted.

“When I walked to my car I saw a note was under my windshield,” Flowers explained. “When I opened it, it said, ‘Half Breeds Not Welcome.’ ”

She immediately went to faculty members she trusted and they in turn assisted her in reporting the incident to Public Safety. However, Flowers noted she did not feel satisfied with the way the situation was handled.

“I don’t think that Public Safety did an efficient job because they told me I shouldn’t post on Facebook and not expect retaliation,” said Flowers. “They handled it terribly. Milton PD told me the same thing, which is extremely frustrating considering a Facebook post doesn’t mean I was asking to be a target.”

Flowers decided to turn to social media to express her frustrations, explaining she is tired of being told to keep quiet.

Curry College President Ken Quigley is similarly eager to engage publicly with the campus. He sent a college-wide email on Thursday, Sept. 28 to invite members of the Curry community to an open forum to discuss a plan of action.

“As I wrote to all members of the Curry community at the start of the academic year and shared directly with our entering class at Convocation, ‘Hate Has No Home Here.’ Simply put, acts of bias will not be tolerated on our campus,” wrote Quigley.

He continued to say that he, alongside Curry’s executive team and senior staff, will facilitate a community discussion that will take place outside of the Student Center at 2 p.m. on Friday, Sept. 29. The event has already been advertised on a number of Curry-affiliated social media sites, email listings, and posts.

For Flowers, finding those responsible is the necessary starting point of any solution. 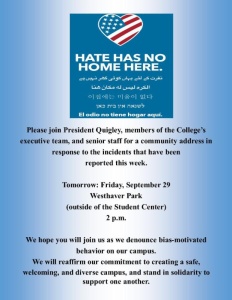 “At this school, I feel like you could literally get away with anything because nothing is being done to protect our safety,” Flowers said. “All Public Safety does is patrol the campus every now and then. We have all this money, why don’t they put it towards [more] cameras, because a good chunk of the crimes that happen on this campus could be stopped or they would easily be able to find the person who did it.”

As this is an ongoing investigation, Public Safety and the Dean of Students Office have remained quiet on what further action will be taken regarding each specific incident. Although security cameras were added to campus this semester, large portions of Curry are not covered.

Director of Public Safety Paul King simply offered a similar response to the one already posted on the portal.

“The College has both clear policies against hostile or hateful speech and a full commitment to creating a safe, welcoming and diverse campus,” said King. “These acts are contrary to all that Curry, its students, and faculty and staff stand for.”